In current skittish condition, predicting the market's response to any news is a challenge at best, as reaction follows action.

Spanish LCC, Vueling, reported reasonable numbers on Thursday, but suffered on the back of is traffic results for the month of October. Management professed a strong outlook for 4Q08, based on the fact that the carrier has reduced capacity by six aircraft, for a capacity reduction of 23.3% over the same month last year, allowing it to "to very significantly reduce" its cost base.

Vueling was also able to generate higher yields. Its "focus on revenue per flight improvement" was a key goal and resulted in a year on year improvement (although at the cost of load factor, down at 66.2%. Consequently, "a significant Q4 results year-on-year improvement is expected."

Vueling is, subject to EU Commission approval, planning to merge with Clickair.

easyJet meanwhile, still under attack from its founder, Sir Stelios Haji-Ioannou, recovered much of the ground it lost earlier in the week when he upgraded his public attack on the carrier's expansion planning. Perhaps investors feel that, either way, the airline should do pretty well - or they think that Sir Stelios will prevail and that dividends are not far away. This one will go on for a while. 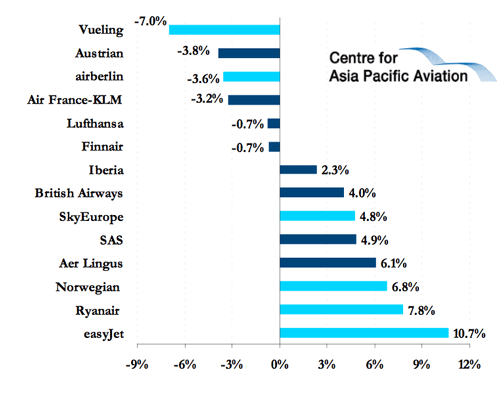