With European share markets in decline - the FTSE and DAX both down nearly 5% - most airlines in fact performed slightly better than the market.

easyJet is still suffering from the uncertainty of its internal squabbling, as founder and largest minority shareholder Sir Stelios Haji-Ioannou continues to attack the airline's growth strategy.

British Airways also declined steeply, perhaps because Winona Ryder became ill on one of its flights, but also as sentiment towards the carrier weakens further. Its would-be partner, Iberia, by corollary, strengthened, as the market saw it becoming a stronger contender to take more of the proposed joint airline's equity. 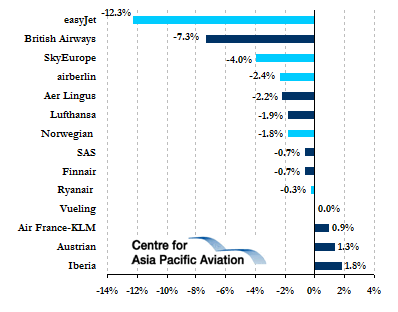