easyJet’s shares fell 3.6% yesterday, after the carrier reported a 91% slump in operating profit and an 82% decline in net profit, to GBP60.1 million and GBP71.2 million, respectively. The LCC added that, despite the reduced earnings in FY2009, it was “one of the very few European airlines to make a profit during this last 12 recessionary months”.

The carrier, which was negatively effected by rising fuel costs and lower interest income in the 12-month period, added that it expects profits to be substantially higher in 2010, despite stating “we can’t see any green shoots” in the economy.

Explaining the weaker result, CEO, Andy Harrison, in an interview with BBC Radio, said “the issue with our profits is to do with the way in which our fuel hedging works; we average fuel prices which means that there is a delay between the drop in market prices and the benefit to easyJet so we'll see a GBP100 million improvement to our profits in 2010”.

Air Berlin’s shares fell 1.4% yesterday, despite Germany’s second largest carrier reporting EBTIDAR, EBIT and net profit improvements in the three months ended Sep-2009. During the third quarter, Air Berlin reported a 9.4% increase in EBITDAR, to EUR229 million, with a double-digit improvement in EBIT (+33.5% to EUR118 million) and a triple digit net profit improvement (+111% to EUR95.2 million). Revenues were down 8.2% to EUR974 million, due to the carrier’s planned capacity reductions.

The carrier, which will publish detailed information for the three months ended 30-Sep-09 on 19-Nov-2009, also maintained its previous forecast that it will achieve an improved year-on-year operating result in 2009, despite the challenging economic environment.

President, Luiz Inacio Lula da Silva, stated Brazil’s economy may have expanded approximately 9% in 3Q2009, adding that the economy is growing at a “Chinese pace”. Budget Minister, Paulo Bernardo, added that the government may revise its forecast for economic growth for 2010 from the current forecast of 4.5% to 5%. 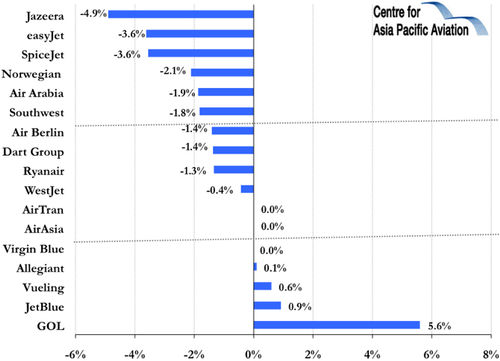