European airline shares slumped again on Monday (17-May-2010) as investors remained concerned over the future of the region’s economy and ash-related cancellations continued.

Turkish Airlines (-3.0%) was down, as CEO, Temel Kotil, stated during trading that the airline is considering purchasing a stake in fellow Star Alliance member, LOT Polish Airlines. Turkish is to first create a joint venture with LOT on selected routes. Mr Kotil stated LOT is the only Central European carrier it is interested in, as it fits with Turkish Airlines’ business model. The carrier was previously in talks to purchase a stake in Serbian carrier, JAT Airways.

easyJet (-5.9%) suffered its biggest fall in 16 months, following the resignation of founder, Sir Stelios Haji-Ioannou. Sir Stelios resigned his position in protest at the carrier’s planned rate of capacity expansion and to gain greater freedom to exercise easyGroup's rights as a shareholder. easyJet's board approved a growth rate in Jun-2009 of approximately 7.5% p/a over the medium term.

Analysts at Deutsche Bank stated there is a “considerable downside risk” in the short term due to the resignation, adding the discord between Sir Stelios and the carrier’s Board of Directors is unsettling. However, Royal Bank of Scotland (RBS) analyst, Andrew Lobbenberg, stated he still sees “significant growth opportunities” for the LCC, despite the resignation. The company rates the LCCs stock at ‘Hold’.

Thomas Cook Group (-3.2%) also fell despite analysts at Panmure Gordon maintaining their ‘Buy’ recommendation for the company’s shares. However, the analysts reduced their earnings per share estimate for the group, citing higher assumed interest charges, after Thomas Cook’s successful refinancing. 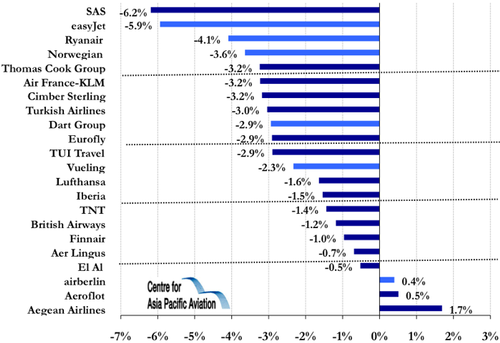