easyJet's Finance Director, Jeff Carr, has been recruited by transport group, FirstGroup. The LCC will commence the search immediately for a replacement for Carr, who had been with the airline since 2005.

It is the second major executive change at the airline this year. Sir Michael Rake will join the easyJet board in the "early summer", most likely to assume the Chairman's position to be vacated by Sir Colin Chandler in July. There has been speculation Sir Colin is leaving as a result of ongoing boardroom tensions over the carrier's strategic direction, namely its growth plans. easyJet's interim results will be published later this week. The carrier's shares lost 4.8% in early trade on Friday and closed down 3.9%.

Most other European stock markets were closed on May Day. 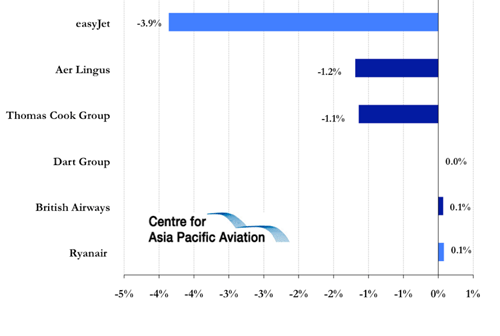