easyJet reported a pre-tax loss of GBP153 million in the first half amid “tough” trading conditions, CEO Carolyn McCall said, "with sharply rising fuel costs combined with cautious behaviour by consumers" and an adverse effect from taxes on passengers. easyJet plans to freeze fleet growth to maintain control of high fuel costs and taxes.

“With nearly half of summer seats now sold, in line with the prior year, second half total revenue per seat is slightly ahead of the prior year with planned improvement in yields, bag charges and other ancillary revenues,” the airline stated. “Consequently full year total revenue per seat at constant currency is expected to be broadly flat. Based on our performance in the first half, the impact of the strengthening of the euro on our cost base, which has been largely offset by a compensating benefit on revenues and current yield trends, the outlook for the full year remains in line with expectations at current fuel and exchange rates.”

Loss in line with guidance

easyJet reported a pre-tax loss of GBP153 million, a fall from GBP67 million in 1HFY2010. Sharp increases in jet fuel prices and passenger taxes in the period neutralised the carrier’s work on the revenue side. The result was at the higher end of the airline’s guidance given in Jan-2011 of a pre-tax loss of between GBP140-160 million.

Revenue, pax up in first half

Passenger numbers in the period increased 11.6% to 23.9 million. Efforts to diversify away from the UK market continued in the first half, with 59% of passengers originating outside the UK, an increase of 5ppts over the same period in 2010. 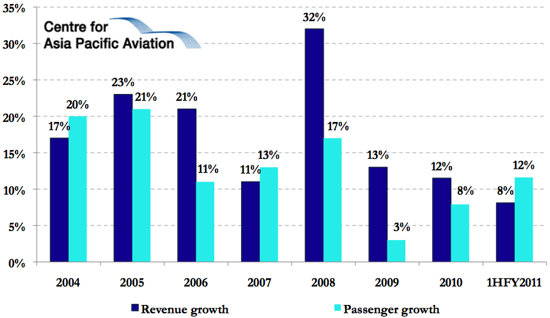 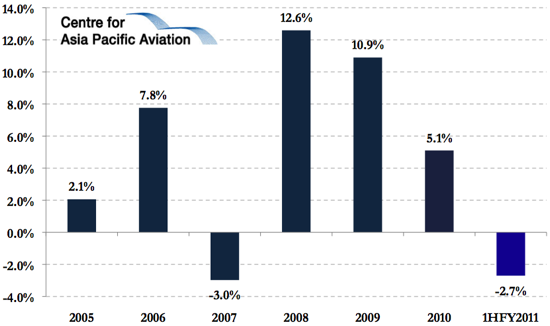 Squeezed at both ends

Margins at the LCC were squeezed in the first half. Revenue per seat fell largely due to increased passenger charges and investment in new routes. Ongoing poor consumer confidence across Europe was also responsible for the fall in yields. 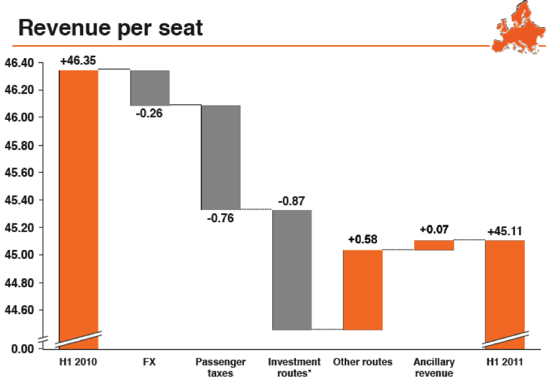 At the other end, costs per seat were pushed up sharply on the back of sharply rising fuel costs. The near-doubling of pre-tax losses was driven by a GBP43 million impact from fuel price increase, which now accounts for more than a quarter of the easyJet’s total costs. Loss per seat was GBP5.47 in the period. 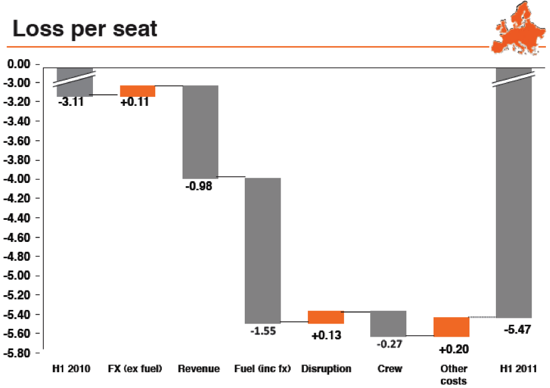 The airline plans to continue to work on boosting yields by increasing its share of the less-price sensitive corporate market. With the exception of London Heathrow, easyJet now has a presence at nine of Europe’s 10 major hub airports. The LCC will continue configuring flight frequencies and destinations that are attractive to business travellers, however the upcoming peak summer season is likely to see the carrier optimise profitability by shifting capacity from business to leisure routes. A larger slice of the European business market and decreased exposure to discretionary leisure travel should make easyJet more resilient in the face of fuel price increases and cautious behaviour by consumers. The challenge will be incorporating the added costs and complexity of moving upmarket in the face of ongoing weak revenue and high cost environments.

Total ancillary revenue came in at GBP286 million, a 10.8% increase. Due to similar increase in passengers carried, was broadly flat for the six months at GBP10.20 per seat. Ancillary revenue improved in 2Q2011 after declining for three consecutive quarters. easyJet reversed that trend as fuel prices rose and this revenue stream is likely to play a larger role in offsetting high jet fuel prices. easyJet has recently announced several new fees and charges which are partially aimed at offsetting increased fuel costs, including introducing higher baggage charges on longer sectors and increase costs of credit card transactions.

Ancillary revenues as a percentage of total revenues 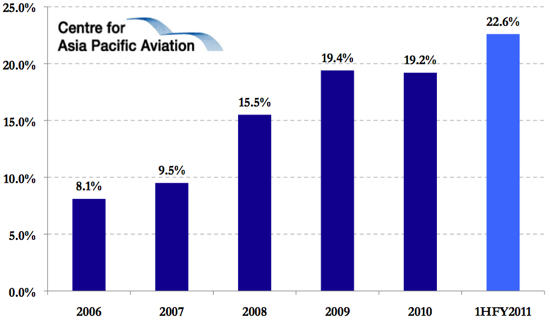 Cost per seat (ex. fuel) fell 2.8% in the period, excluding the costs of snow and strike disruption in 1Q2011. Prudent cost control saw unit costs reduced across all lines with the exception of crew costs where easyJet has been investing to address punctuality problems.

Ms McCall stated the entire industry is planning for a sustained increases in jet fuel prices. "We are planning for fuel prices to stay high. History shows that when the price rises there is an impact on yields [fares] and passenger numbers," she said. She conceded that consumers will not swallow the higher fares needed to offset higher costs, which will require aircraft to be parked in future slow periods to increase pricing power. easyJet will hold its fleet size constant at 204 aircraft next winter and will follow a “conservative approach” to growth.

News of slowing fleet plans was welcomed by major shareholder Sir Stelios Haji-Ioannou. “At long last the easyJet board has recognised that by not growing the fleet beyond the current levels of just over 200 aircraft the company will make more money than by buying more,” Sir Stelios said. “Management now needs to sweat the business’s existing assets.” He accused the balance sheet of being “lazy” due to the “absurd” lack of dividend payments since its 2001 listing, and repeated his calls for shareholders to be rewarded. 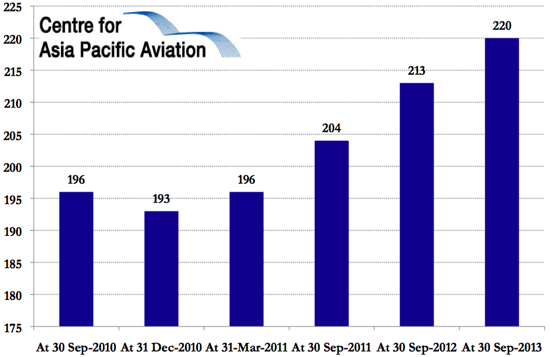 Despite the loss, easyJet shares rallied strongly on 10-May-2011, jumping the most in seven months on the back of news from CEO Carolyn McCall that forward bookings and yields for the peak summer season are strong and delays which hurt results in 2010 are being eliminated. The CEO reported solid results in strategic initiatives, including improved on time performance, customer satisfaction levels, an amended brand license that should address licensing issues with easyGroup founder Sir Stelios. The added certainty surrounding easyJet’s operational performance will help the airline in its push for more business travellers and longer-term profitability. “We’ve put in a lot of the stepping stones that we had to in order to build the foundations to be able to attract more business passengers,” Ms McCall said. “We had to improve reliability and punctuality, and we have fixed that. We are confident about our performance there.”

easyJet to ramp up APD campaign

While the price of fuel is an input largely outside the airline’s control, easyJet announced it is stepping its campaign against APD and other passenger taxes, which it claims was responsible for a GBP21 million increase in the pre-tax loss. UK APD and similar taxes paid in other countries by easyJet passengers totalled GBP153 million in the first half of the year.