The majority of European carriers stocks were down on Wednesday (16-Jun-2010), after IATA warned premium air travel on the continent is likely to weaken, due to government spending cuts in Britain, Germany, Greece, Portugal and Spain, falling consumer confidence and debt worries. A gain in oil prices (+1.0%), to USD77.67, also sent airline shares lower.

easyJet (+1.3%) was one of the biggest gainers of the day. During trading, founder Sir Stelios Haji-Ioannou told a London court that ticket sales are the only core activity under its brand licence agreement and the carrier is close to sullying the “easy” brand by trying to introduce more ancillary revenue streams.

Sir Stelios stated easyJet is “gouging the customer with useless services” as a “short-term response” to boosting revenue. He added growth of the carrier over the past ten years has damaged its profitability, leading it to “squeeze whatever revenue it can from its customers regardless of the potential adverse impact this can have on the way customers relate to the ‘easy’ and easyJet brands”. According to Sir Stelios, the carrier’s profit margin in FY2009 was 1.6%, compared with a margin of 11.2% in its first year of operations.

Lufthansa (+1.1%) announced plans to raise fares from 22-Jun-2010, although the carrier partially offset the increase by lowering fuel surcharges. The carrier will increase return long-haul fares by approximately EUR30, with intra-European fares increasing by EUR10-20. The increase, the first by the carrier since Oct-2009, will help the carrier finance investment in new aircraft and redesign its first and business-class cabins, according to the carrier. The carrier will also reduce fuel surcharges by EUR3 per sector to EUR21 on services in Europe and by EUR5-7 on long-haul services to between EUR77 and EUR92.

British Airways (+0.2%) gained only marginally. During trading the Advisory, Conciliation and Arbitration Service (Acas) announced BA and cabin crew union, Unite, resumed negotiations on 15-Jun-2010, after Acas tabled a potential way forward last week to the parties to break the deadlock in their long-running dispute. However, the two were unable to move closer to an agreement. No further meetings are planned. Acas stated it would continue to monitor developments and its services remain available. BA stated it remains available for further negotiations, while Unite Joint General Secretary, Tony Woodley, stated he hopes talks will resume later this week.

Elsewhere, Aer Lingus (+2.5%) gained on its announcement the day prior that it plans to temporarily suspend loss-making trans-Atlantic routes. Norwegian Air Shuttle (-3.8%) and airberlin (-2.0%) fell. 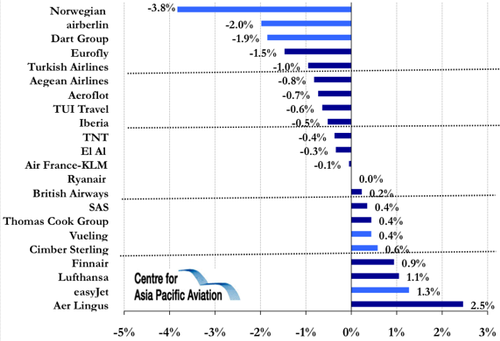