In its 3QFY2013 (Apr-Jun) trading update, easyJet has again beaten expectations, with revenue per seat up 6.7% versus previous guidance of around 4%. According to CEO Carolyn McCall, “easyJet has delivered a strong performance in the third quarter in a benign capacity environment” as competitors continued to cut capacity on its routes.

The stock market has welcomed strong earnings growth and easyJet's plans to order new Airbus aircraft. easyJet’s shares are up 165% over the past 12 months and have more than quadrupled over the past two years. Founder and leading shareholder Sir Stelios Haji-Ioannou may not agree with management and the rest of the shareholders, but at least he can console himself that his family’s holding is now worth around GBP2 billion.

3Q revenues up 10.5% with capacity growth focused on markets with higher ROCE potential

easyJet's 3QFY2013 interim management statement does not report earnings, but it does report revenues and gives some details on cost per seat. Total revenues grew by 10.5% year-on-year to GBP1,142 million. Seat capacity was up 3.6% and revenue per seat grew by 6.7% (6.1% at constant exchange rates), in spite of a 0.9 ppt decline in load factor to a still high 88.2%. Passenger numbers grew by 2.6% to 16.4 million in the quarter.

Capacity growth was higher than the overall rate in the UK (c. 4%), Switzerland (c. 13%) and Italy (c. 7%). easyJet is keen to emphasise that it is focusing on markets “with the potential to generate higher return on capital employed”.

Although it does not reveal return on capital employed data for different markets, this language seems clearly to be aimed at Sir Stelios, who has called for data on route profitability.

Competitor capacity cuts have made life more pleasant for easyJet

Growth in revenue per seat of 6.7% was boosted by a number of factors, not the least of which was the ongoing capacity cuts implemented by competitors on easyJet routes. Competitor capacity on its routes fell by 1.2% year-on-year in 3QFY2013. This continues what CEO Carolyn McCall describes as a “benign capacity environment”, although the rate of competitor capacity cuts was slower than in previous quarters.

Network and other factors also help revenue per seat

Revenue per seat also benefited from revenue initiatives and other factors, including a slightly longer average sector length (+0.7%) as a result of new routes such as Manchester and London Gatwick to Moscow and routes from the UK and Milan to Sharm El Sheik; improvements to the network; changes to the revenue management system and easyJet.com; and increased levels of business travellers (up by 4.2% versus overall passenger growth of 2.6%). The introduction of allocated seating was responsible for 0.9 ppts of the 6.1% increase in revenue per seat (at constant currency).

Revenue per seat growth was partially offset by the shift in Easter from April (which falls in easyJet's 3Q) last year to March this year (easyJet's 2Q), which led to the small decline in load factor.

In addition to the new routes mentioned above, new destinations launched this summer include Belgrade (served three times weekly from Milan Malpensa) and Bergen (served daily from Gatwick). New routes aimed at business travellers include Rome to Copenhagen (daily) and to Hamburg (daily) and new leisure routes include London Southend to Newquay (three times weekly) and Edinburgh to Dubrovnik (twice weekly). The carrier’s growing presence and acceptance in Italy has led to it operating on the Rome to Tel Aviv route (four times weekly) under a bilateral agreement between Italy and Israel.

easyJet continues to signal its focus on achieving its return on capital targets, both for the company as a whole and in each part of its network. It has reallocated capacity from the closure of its base in Madrid and reduced its presence in Liverpool. It has increased capacity at Edinburgh, Gatwick, Manchester, Rome Fiumicino, Lisbon, Lyon, Nice and Toulouse, where it sees the potential for higher returns.

In May-2013, easyJet announced an agreement with Flybe to purchase all of its slots at Gatwick Airport from summer 2014 for GBP20 million. Although easyJet has not yet indicated the routes on which it intends to use these slots, the deal will increase its share of slots at Gatwick from 41% to 47% and should allow further improvements to its network.

In Jun-2013, easyJet secured a five year agreement with Manchester Airports Group creating the opportunity to grow at Stansted Airport.

Cost per seat slightly higher than guidance due to disruption costs

Cost per seat excluding fuel grew by 6.4% year-on-year in the quarter, although this was adversely affected by currency movements. At constant exchange rates, the increase was 4.5%. This was slightly higher than the guidance given by easyJet management for 2H2013 at the time of its 1H2013 results announcement in May-2013, when it expected cost per seat excluding fuel to grow by “around 4%”.

In addition to known increases in airport charges amounting to GPB36 million, particularly coming from Spain and Italy, disruption-related costs increased by GBP6 million year-on-year and were a little higher than expected. These related to additional de-icing in April and May and also to the French ATC strike in June.

Nevertheless, although growth in cost per seat ex fuel was slightly higher than expected, its full year unit cost outlook is unchanged and easyJet says it is on track to deliver GBP135 million of cumulative cost savings by the end of FY2013 under its “easyJet lean” programme. It expects future savings from ground handling deals including a long-term contract at Geneva and deals at non-regulated airports.

easyJet says it has recently secured a deal with its pilots in Italy, which will deliver improved lifestyle for pilots and increased flexibility and efficiency for easyJet. In the UK, easyJet secured an agreement to increase the number of directly employed pilots whilst retaining flexibility for easyJet.

On time performance has again improved

A key factor in increasing its appeal to passengers, in particular to those travelling for business, and in maintaining cost performance is easyJet’s levels of punctuality. In 1HFY2013 a return to more typical winter weather saw its on time performance (OTP) slip relative to the previous winter, although it was substantially higher than three years ago (see chart below). In 3QFY2013, OTP overtook last year’s levels for the first time, improving from 87.1% last year to 88.9%.

Quarter on quarter, OTP improved by 3 ppts from 2Q, a creditable result given that easyJet carried 27% more passengers in 3Q versus 2Q.

Forward bookings are in line with last year; FY2013 profit outlook is ahead of consensus

As at 18-Jul-2013, easyJet had sold 73% of its available seats for 2HFY2013, including the 88% sold and already flown in 3Q. This is broadly in line with the 74% sold for the second half at the same time last year and gives easyJet fairly good visibility on the outlook for its FY2013 results. 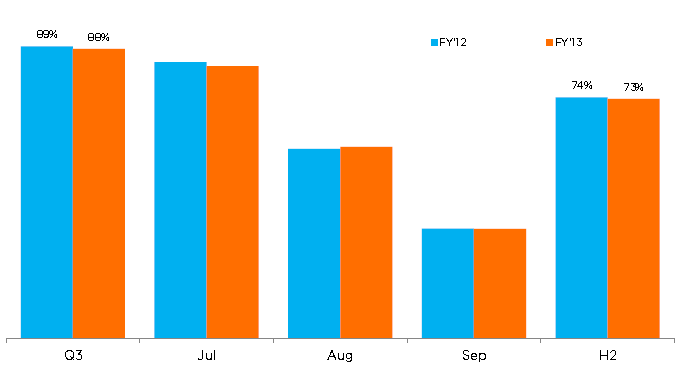 For the first time in this financial year, easyJet has now given a range for its expected profit before tax in FY2013. Previously, it had said it expected improved returns and profitability this year. It now says it expects profit before tax to be in a range of GBP450 million to GBP480 million, compared with GBP317 million in FY2012. Analysts’ consensus forecast for FY2013 was GBP431 million before the 3Q publication, according to Bloomberg.

The stronger than expected profit target is based on an improved outlook for 2H revenues per seat at constant currency, which easyJet now expects to grow by up to 6% versus previous expected growth of around 4%.

New aircraft orders have been approved by shareholders, with Sir Stelios in the minority

At an EGM on 11-Jul-2013, easyJet shareholders voted to approve the acquisition of a further 35 current generation A320 aircraft (through the exercise of options and purchase rights) under its existing Airbus deal and a new order for 100 A320neo aircraft, plus a further 100 A320neo purchase rights. easyJet's founder and biggest shareholder, Sir Stelios Haji-Ioannou, voted against the proposal.

With the aircraft order approved, easyJet's management is now able to continue with its strategy of modest annual capacity growth of 3% to 5% for the next decade, mainly by taking market share from higher cost competitors on existing routes and also by adding some new ones.

easyJet’s 3QFY2013 results and confident outlook for the full year demonstrate its ability to take advantage of favourable market conditions and to deliver earnings growth. While any increase in competitor capacity could place downward pressure on easyJet's buoyant revenue per seat figures, its fleet plan also has the flexibility to reduce or even reverse its growth over the medium to longer term.

Moreover, it can now be secure that it has the support of the majority of shareholders in the key area of greatest strategic disagreement with Sir Stelios. He may further reduce his holding somewhat, but he seems likely to remain a significant long-term shareholder.

The difference of opinion between him and management over fleet growth is also likely to remain, but it is no longer a potential obstacle to easyJet's plans. Nevertheless, Sir Stelios’ threat to “hold the directors to account by all legal means if it turns out that this deal destroys shareholder value” is likely to concentrate management’s minds. Ensuring flexibility of future deliveries is a solid counterpoint to that and a desirable for most airlines, although not all would have the clout with manufacturers to drive such a deal.