easyJet (-4.8%) led the decline in European airline shares on Tuesday (16-Nov-2010) despite beating analyst expectations for its FY2009/10 financial results. The LCC reported a net profit of GBP121.3 million for the 12 months, compared with GBP71.2 million in the previous corresponding period. Analysts had expected the carrier to report a profit of GBP114 million.

The LCC stated it is "highly cash generative and well financed" with this meaning the airline's Board "feels that the time is right to set in place a formula to trigger a dividend payment in years when the company is profitable whilst at the same time ensuring that it retains a conservative capital structure". The carrier, therefore, intends to commence the payment of an annual dividend based on a dividend cover of five times. The first dividend will be payable in 2012 in respect of the 12 months ended 30-Sep-2011.

British Airways offer to no longer be recommended by union

British Airways (-4.0%) also declined after Unite joint General Secretary, Tony Woodley, confirmed he met with BA cabin crew representatives, where it was unanimously agreed that the last offer tabled by BA management could not be recommended to members. Unite is contacting the company with a view to reopening discussions to seek to achieve a recommendable settlement to be put to cabin crew.

Finnair (-4.0%) was also down on industrial relations concerns, with the carrier stating a strike planned for 30-Nov-2010 by cabin crew would halt most services. The flight attendants' union may hold a strike in two weeks if it fails to reach a deal over shifts and other employment issues. The previous collective agreement with the Finnish Flight Attendants' Association (SLSY), which also represents cabin crew at SAS's Blue1 unit, ended in Apr-2010. 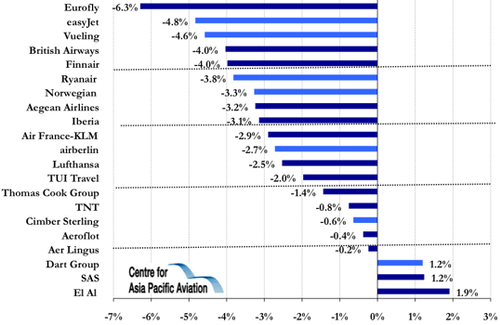