European airline shares ended trading with another day of mixed results on Tuesday (22-Jun-2010). Wider markets fell, ending a nine-day surge in shares, as investors moved to take profits from seven-week highs reached the day prior.

Germany's Leading Economic Index (LEI) increased 1.6% in Apr-2010, with the recent behaviour of the composite indexes "suggesting that moderate expansion in economic activity should continue in the near term", according to The Conference Board. The DAX (-0.4%) ended trading lower, despite the improved performance.

Consequently, JP Morgan upgraded Air France-KLM (+0.5%) from ‘underweight’ to ‘overweight’, stating there is a scope for significant price recovery. Lufthansa (+0.3%) was increased from ‘neutral’ to ‘overweight’, due to increasing management optimism and scope for “fairly rapid yield recovery” this year.

Iberia stated the pension agreement is a “positive step forward in the merger process”. The carriers’ merger agreement enables Iberia to terminate the agreement if the pension recovery plan is not, in Iberia’s reasonable opinion, satisfactory because it would be materially detrimental to the economic premises of the proposed merger. All contributions into the British Airways’ pension funds will continue to be funded by the carrier and will not be funded by Iberia or the merged holding company International Airlines Group. Iberia has three months to reach a decision on the pension recovery plan. 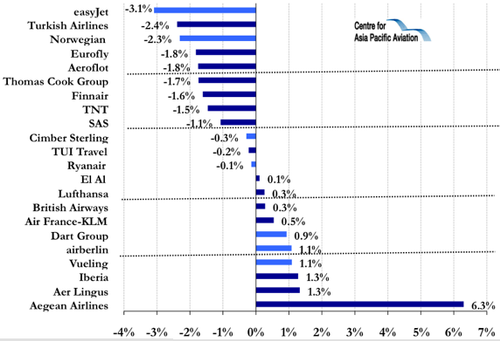