Easter helps Continental’s April yield, May could be just as depressed

Much has been made of Continental Airlines’ seeming stabilisation of its unit passenger revenues last month – its shares rocketed up 18% on the report, for one. Continental said its revenue per available seat mile (RASK) was down 12.5% to 13.5% year-on-year in April, following an unprecedented 19.6% plunge in March. But the timing of Easter probably exaggerated the figure by around 2-3 ppts (with a similar downward impact on the March figure). This suggests yields are still deeply depressed and are significantly outstripping the reduction in capacity and unit costs. 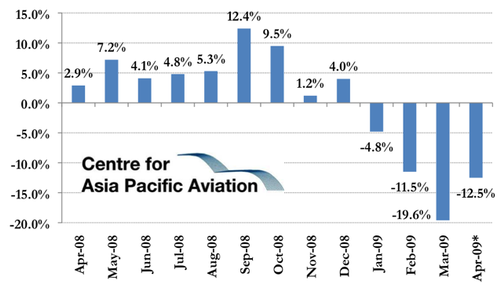 Investors appear to have forgotten it was only two weeks ago that Continental CEO, Larry Kellner, stated he “wouldn’t be ready to call a bottom” to the current cycle. At the time, he said that looking at bookings for June, “we have probably on a system basis only sold 30% to 35% [of seats] right now, a little more in the international arena than the domestic arena. But there’s an awful lot of tickets to sell between then and now”.

In the two weeks since these statements, swine flu has gripped the world’s media, resulting in a steep reduction in demand to/from Mexico – where Continental is the largest foreign carrier. Continental is slashing its capacity south of the border by 50% this month, representing 2% of total capacity. The yield impact could again be bigger than the systemwide capacity reduction – so May data could again show fairly depressed figures.