27-May-2009 was another mixed day for aircraft manufacturers, with Airbus parent, EADS, the big winner, Boeing dropping in line with the rest of Wall Street and Embraer slumping as Brazilian markets ended a four-day upwards run. The European aerospace conglomerate saw its share price up 5.6% yesterday, despite confirmation of its pessimistic long-term forecast by CEO, Louis Gallois at its AGM.

The European manufacturer is concentrating on cash conservation, given current economic conditions, and it expects flat revenue growth this year. EBIT is expected to decline from last year’s EUR2.8 billion, although the company expects it will remain profitable.

According to Gallois, the impact of the downturn will only be moderate in 2009, but 2010 will be the “critical” year for EADS. Declining orders for Airbus are a concern, with the manufacturer expecting to more or less meet its target of 300 orders, although the target is getting “more and more challenging”. Aircraft deliveries are expected to exceed 480 for the year. Airbus’ orderbook currently includes approximately 3,500 aircraft.

EADS may have also been buoyed by M&A speculation, after reports that it is interested in acquiring a stake in Korea Aerospace Industries, potentially picking up Doosan Group’s 20.5% stake. The Korea Development Bank also intends to sell its stake (30.5%) in the aircraft manufacturer, which produces A320 wing parts for Airbus, as well as military aircraft for South Korea.

Boeing was down 1.3% yesterday, despite more reassurances that the B787 would conduct its first flight sometime next month and that demand for the aircraft remained strong, despite “market churn” resulting in 57 cancellations for the aircraft, according to CEO, Jim McNerney.

Boeing Capital Corp President, Walt Skowronski, confirmed that the company plans to lend slightly less than USD1 billion to customers this year and more than USD1 billion in 2010. He also stated that Boeing has seen traditional financing sources for airlines opening up slightly over the past three weeks.

Embraer fell 4.1%, as the Bovespa index declined 0.1% on lower confidence in the strength of the regional economic recovery and spill-over from declining US markets. Media reports in Brazil suggest that Embraer is looking at rehiring some of the 4,000 workers it let go earlier in 2009.

Aircraft lessors were generally positive, with Aercap, Babcock and Brown Air and Genesis Lease all posting increases. However, Aircastle’s share price dropped 5.3%, erasing most of the gains it has made over the past week. Air Partner reported a drop of 2.5%.

Expedia was also down, falling 2.4%. The online travel agency announced it would permanently eliminate online airfare booking fees, which had been enacted on a temporary basis two months ago. It will also eliminate cancellation fees for most reservations, including airfares, car hire and hotels. 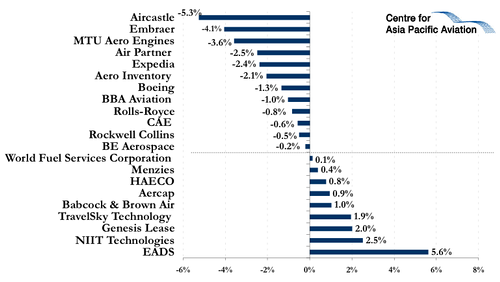