Airbus announced it is scaling back A380 production, reducing 2009 deliveries from 18 to 14 and cutting 2010 deliveries to "more than 20 aircraft", from a previous target of "30 to 40" aircraft. The announcement confirms reports that have been circulating for the past few weeks that Airbus would not meet its A380 delivery targets. EADS shares rose 3% yesterday.

Airbus does not expect the A380 delays to have a significant impact on its operating profit for the year, although it will take “mitigating actions” to compensate for negative effects on free cash flow.

Leasing companies rose on news of the successful sale of Allco's aviation arm to a investors headed by China's HNA Group, parent of Hainan Airlines. Babcock and Brown Air’s shares recorded an 11.3% gain yesterday. Since mid-Mar-2009 the company’s share price has leapt from below USD3 per share to just under USD7 per share. Aer Cap, which reported an 8.3% increase in share price yesterday, has witnessed a similar upward climb since Mar-2009. The leasing company has seen its shares move from a low of USD1.83 to USD5.74 on 06-May-09, the highest price recorded since Feb-2009. 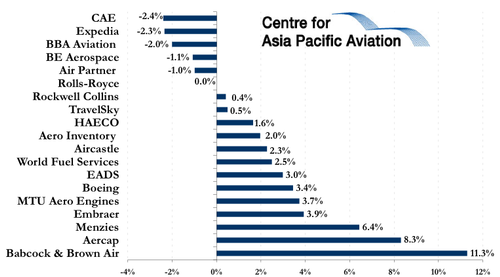