Airlines are going to be acquiring more aircraft than ever before, according to the latest long-term forecast from Airbus. The European manufacturer released its updated 20-year Global Market Forecast yesterday, lifting the number of aircraft it expects airlines to acquire in the next two decades from 24,260 to 25,000, and the value of these aircraft from USD2.8 trillion to USD3.1 trillion.

When the last forecast was made, in Feb-2008, airlines were coming off a rare good year, when most of the industry had reported a profit, managing to pinch non-fuel costs even as oil went above USD70 per barrel.

However, in the intervening period, airlines have suffered two very bad years indeed, with the twin shocks of the 2008 fuel spike and the onset of the global financial crisis. These crises sent costs soaring on the one hand, and revenues plummeting on the other. When trading and hedging losses are included, net losses exceeded an astonishing USD40 billion in 2008 (or USD16.8 billion excluding exceptionals) and IATA forecasts an USD11 billion loss for airlines this year.

The dramatic turnaround has however not dampened Airbus’ outlook. The manufacturer continues to believe in the long-term resilience of the aviation market to shocks and cyclical effects. It expects RPKs to decline by 2% this year, but bounce back decisively in 2010 to 4.6% growth, just below its long term forecast of 4.7% p/a.

The greatest demand for passenger aircraft will be from airlines in the Asia Pacific region and emerging markets, accounting for 31% of total demand. Europe will account for 25% of new aircraft, trailed by North America, with 23%.

1,248 new aircraft deliveries per year over the next 20 years

The new forecast expects an average of 1,248 new aircraft of 100 seats or larger will be delivered each year over the next 20 years. Just under 17,000 (about 70% of total units) of these will be narrowbodies, reflecting the increasing importance and success of the LCC sector, as well as increased route liberalisation and an accelerating demand for single-aisle aircraft in Asia.

However, Airbus has ruled out an early replacement for the A320 narrowbody family, setting a 2024 timeframe for a successor aircraft. It may look at offering new engines on the current airframe though, as engine technology develops. Airbus has more than 2,400 A320 orders on backlog, and recently opened a new A320 assembly line in Tianjin, China.

A further 6,240 aircraft will be small or intermediate widebodies, the most lucrative market segment, representing a market value of approximately USD1,300 billion. Airbus’ A350XWB programme will compete with the established B777 and the new B787 in this category.

Airbus forecasts very large aircraft of more than 400 seats will account for around 1,730 orders, its main point of divergence with Boeing, which sees around 740 aircraft orders in this category. Airbus has bet heavily on its 500-plus seat A380, and expects that the future will see a greater concentration of demand and traffic. Higher fuel prices and stronger hub-to-hub growth is also expected to benefit the big aircraft.

Meanwhile short term challenges abound. Airbus has stated that while it is confident the world economy is entering the middle of the recession, and is seeing the start of a recovery, there are “still some dark clouds on the horizon because the airlines are in weaker financial condition”.

These dark clouds may prompt Airbus to cut output in 2010, as carriers have been unable to build up sufficient cash reserves to fulfill their aircraft financing commitments. 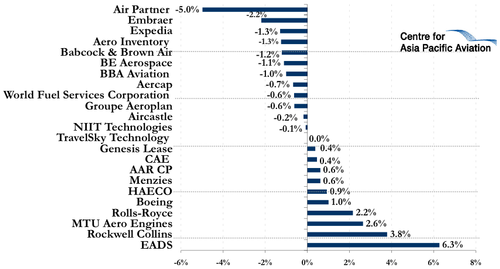