A 51% fall in first half net profit has not dampened investor enthusiasm for EADS, which recorded a stock rise of 3.4% at the close of trading on Friday. The European defence and aerospace conglomerate reported a net result of EUR185 million, and an EBIT of EUR406 million, after EUR200 million of exceptional foreign exchange outcomes.

EADS revenue remained broadly stable in the first half of the year, down just 1% to EUR20.3 billion. Aircraft deliveries at Airbus remain high (250 aircraft), although down slightly at compared to 2009 (254). Airbus’ commercial revenues were down 2%, to EUR12,965 million, reflecting the lower delivery volume balanced out by a small pricing improvement. Airbus product mix is expected to benefit favourably from higher numbers of A380 deliveries through the second half of the year. Seven A380s were delivered in 1H2010.

Importantly, EADS’ order intake surged to EUR30.8 billion, an increase of 79%. EUR24.3 billion of these orders were for Airbus commercial aircraft, more than tripling the value of orders received in the same period in 2009. As of 30-Jun-2010, EADS total order book stands at EUR454.5 billion, EUR65.4 billion higher than six months earlier. This increase includes a EUR56 billion positive re-evaluation of the orderbook, due to the strengthening of the US dollar.

Airbus took firm orders for 117 aircraft in 1H2010, and suffered 14 cancellations. The Jul-2010 Farnborough Airshow has added significantly to this, with Airbus booking orders for 133 aircraft, as well as MoU’s for a further 122. Airbus has increased its full-year target for gross orders to above 400.The manufacturer also announced plans to lift A320 production rates to 40 per month by 2012.

Helicopter, defence and security and satellite ordering levels were all lower in 1H2010.

R&D spending has been increased, as Airbus continues its ramp-up in investment to keep the A350 XWB programme on track. EADS stated A350 XWB programme development is progressing but remains challenging. In addition, the A380 continues to weigh significantly on Airbus the underlying performance. Airbus is working to resolve the final production issues with the aircraft.

Given the continued economic recovery and the commercial success at Farnborough, EADS is increasing its guidance for orders, revenues, underlying profitability and free cash-flow.

EADS performance in the medium-term will be dependent on its ability to deliver on three major programmes: the A400M, the A380 and the A350 XWB. EADS has maintained its full-year EBIT guidance at approximately EUR1.2 billion before one-offs, despite the negative exceptional impacts from foreign exchange accrued in the first half of the year.

Airbus second half EBIT is expected to decline. The positive impact of higher production volumes and better pricing will be more than offset by higher R&D and the deterioration of hedge rates. Full-year commercial aircraft deliveries are expected to be approximately 500.

In other trading, Embraer shares gained 4.6%, on positive expectations ahead of its 1H2010 financial results, due out later today. 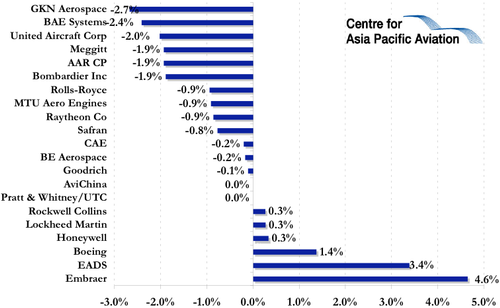 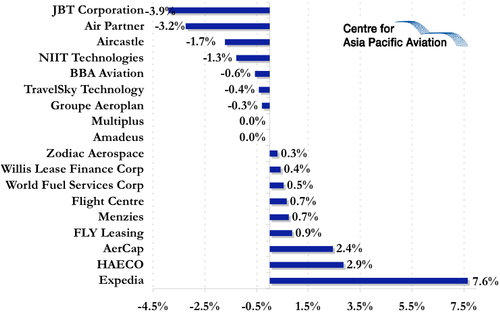