Airbus CEO Thomas Enders has stated in an interview with Germany’s Welt am Sonntag that the German state does not necessarily need to be a shareholder in parent company EADS. France and Germany have been in talks since the beginning of the year over EADS’ ownership structure.

German carmaker Daimler controls a 22.5% voting stake, including 15% in shares it owns itself and 7.5% of shares it manages for a consortium of banks. The manufacturer has been looking to sell its stake in EADS, as it does not consider it a core asset. However, the company’s stake is politically sensitive, as it is seen to balance the 22.5% of EADS held by the French state and French media firm Lagardere.

Mr Enders has suggested that the idea of a golden share, giving France and Germany effective veto power over strategic issues and a defence mechanism against potential takeovers, should be though about “intensively”. However, EADS is registered in the Netherlands, placing it under Dutch corporate law, which has no provision for golden shares.

Shares in EADS were up 0.7% on Monday. Elsewhere, shares in Bombardier dropped 3.8%.

Honeywell announced it has agreed to acquire mobile networking and satellite communication connectivity solutions provider EMS Technologies for USD506 million, net of cash acquired. The purchase is to be split between two divisions, as is expected to be accretive to earnings from 2012. The acquisition will boost offerings in mobile computing technologies and satellite communications in its automation division and aerospace segment.

World Fuel Services Corporation announced (10-Jun-2011) its board of directors has declared a quarterly cash dividend of USD0.0375 per share payable on 08-Jul-2011 to shareholders of record on 24-Jun-2011. 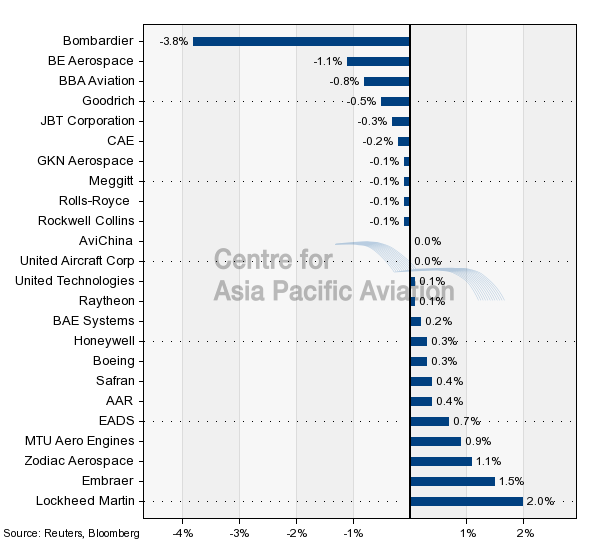