Boeing and EADS, parent of Airbus, were essentially flat in trading yesterday, as the majority of suppliers saw gains despite only moderate performances on European and North American exchanges.

AerCap, the Irish aircraft lessor, saw some of the strongest gains, with its share price surging 7.5%, following the release of details of its 2Q2009 aircraft and engine transactions and a buoyant outlook for 2010.

AerCap also completed a new JV agreement with Waha Capital during the quarter, with each taking a 50% in AerVenture, which will specialize in A320 leasing, as well as closing more than USD660 million in funding agreements. CEO Klaus Heinemann commented that the remainder of 2009 will continue to be very challenging for AerCap, with many of its airline clients experiencing tough market conditions, but the company remain confident that 2010 will show signs of significant market recovery.

After an 11% gain yesterday, Aero Inventory was down 2.5% on trading yesterday. 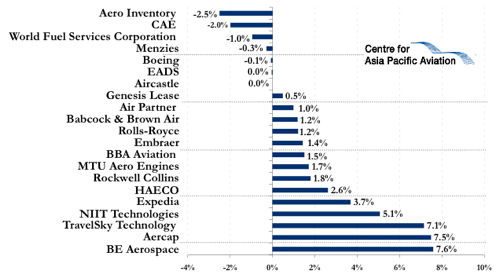