Shares in EADS fell 4.5% on Friday as the company reported a profit of just EUR13 million from revenue of EUR11.25 billion. Operating profit was a more healthy EUR378 million, with the manufacturer forecasting that at current exchange rates Airbus will significantly improve its underlying profitability thanks to better volume, pricing and further economic improvement of the A380 performance.

Airbus CFO Hans Peter Ring stated the manufacturer is facing continued challenges on the development of the A350 and is more cautious about delivery of the aircraft, adding more room to its development timeline. Airbus is also facing concern about the A380 and the affected the problems with Rolls-Royce engines could have on 2011 deliveries.

B/E Aerospace shares fell 4.5% at the end of last week. The company recently reported a 3Q2010 net profit of USD41 million, up 12% year-on-year, due to a better performance from its commercial aircraft unit. The company expects business to continue to improve, thanks to cyclical growth and the general recovery in flying levels.

AeroCentury shares fell 15.9%, following the report of a 3Q2010 net profit of USD241,000. For the nine months to 30-Sep-2010, the company reported lower operating revenues and increasing costs.

Rolls-Royce shares gained 4.6%. The company announced it has isolated the cause of the engine failure for the Trent 900, confirming it is specific to the engine type and unrelated to the test-stand failure of the Trent 1000. 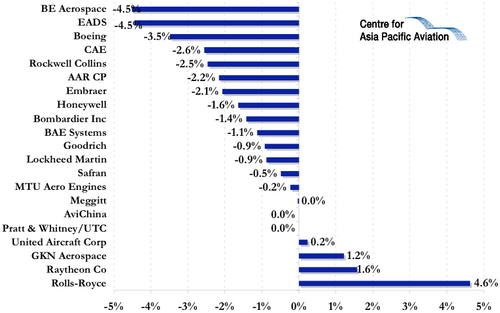 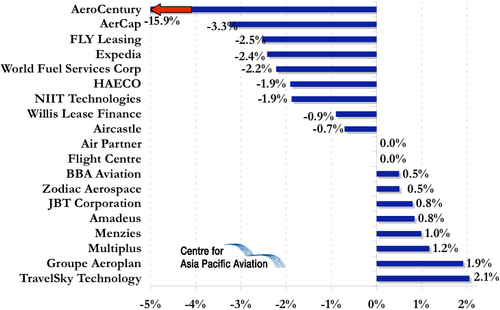