Traffic at Dubai International Airport (DIA) roared ahead by 19.5% year-on-year in Sep-2009 to 3.19 million passenger, as the airport handled an additional 520,000 passengers compared to the same month last year, helping Dubai report its fourth consecutive month of double-digit passenger growth. Singapore's Changi International Airport has also reported its strongest growth in traffic for the year, with passenger numbers up 6% year-on-year in Sep-2009 to 3.06 million.

While the growth in passenger numbers at both airports is coming off slight reductions witnessed in Sep-2008, these figures represent the fastest growth rates at Singapore since May-2008 and at Dubai since Oct-2007.

Hong Kong International Airport (HKIA) meanwhile has taken another backwards step. After reporting growth of 2.8% in Aug-2008, passenger traffic at HKIA was down 3.5% in Sep-2009 to 3.52 million. Overall traffic at HKIA is down 6% on a rolling 12-month basis. 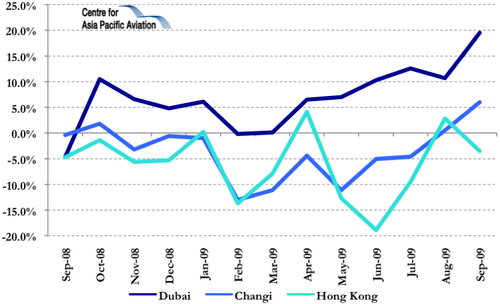 Dubai firmly ahead of Singapore

Passenger traffic at Dubai surged past Singapore’s Changi in late 2008, and has stayed firmly ahead (by an average of better than 350,000 passengers per month) since Jan-2009, although Changi closed the gap considerably last month.

Dubai still has quite a way to go before it consistently exceeds HKIA in terms of passenger numbers (after briefly passing the airport in Jun-2009). 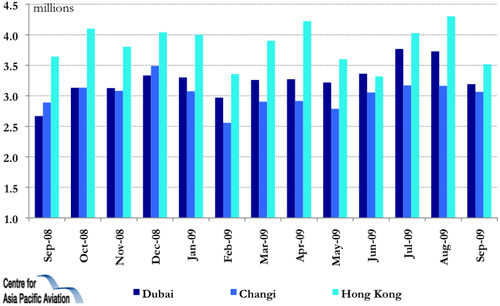 Tony Tyler, CEO of HKIA’s home carrier, Cathay Pacific, stated at the beginning of the week that he remains “cautious” about prospects for a sustained recovery for the local aviation industry in the near future and is seeing few of the “green shoots” reported elsewhere. Cathay Pacific’s yields remain weak, despite the carrier achieving it highest passenger load factors for 2009 during the recent Chinese National Day holiday from 01-Oct-2009. HKIA continues to be affected by the expansion of cross-Strait services and the global economic downturn.

Growth at Dubai is meanwhile coming from “all regions”, according to Dubai Airports CEO, Paul Griffiths, with increasing levels of tourist traffic. Asian traffic jumped 35% during the month, while passenger numbers from Western Europe increased 21%, and rose 20% from the airport’s largest market, India. The seasonal impact of the Ramadan pilgrimage added to the high level of monthly growth.

Is growth coming at the expense of yields?

But growth at Dubai and Singapore is not coming without a price. Singapore Airlines, which reported a 10% decline in passenger traffic and a 12.5% cut to capacity in Sep-2009, is still discounting its fares “to mitigate the decline in loads”.

Emirates does still not expect a return to “normal” pricing until 2010. In Sep-2009, the carrier’s President, Tim Clark, stated that the carrier had cut fares by approximately 30% over the year, to drive demand.

In the premium segment, the Middle East’s share of premium revenue has been falling even as the region's airlines maintain their overall premium passenger share - a sign that Middle East carriers are discounting heavily to attract premium passengers. 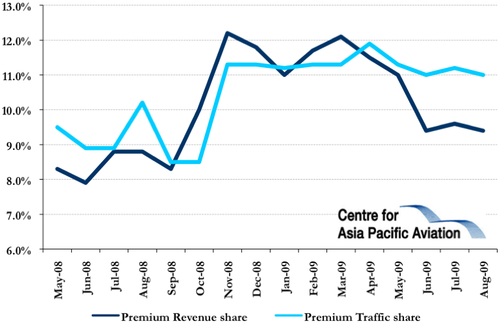 The surge in capacity in the Middle East is not expected to slow any time soon. Regional ASKs rose 13.8% in Aug-2009, according to IATA, taking the year-to-date increase to over 12%.

The region's fast-growing sixth freedom carriers may be hitting, or even exceeding, their passenger targets, but yields and profitability are lagging. Etihad Airways last week quietly pushed back its profitability target back by one year to 2011. The Abu Dhabi carrier would not be alone in feeling expansion pains, with collateral damage extending well beyond the Middle East airlines and their increasingly powerful hubs.