Airbus has been the big winner at the show. The headline deal was an order by Ethiopian Airlines for 12 A350 XWBs. Vietnam Airlines has also signed an MoU with Airbus for six new aircraft, including four A380s and two A350s. Other agreements include the confirmation of Air Austral’s order for two 840-seat single class configured A380s, as well as ten A320s ordered by Yemenia and an MoU with Nepal Airlines for an A330 and an A320.

Boeing has not been left out either, announcing eleven new B737NG orders from airlines in Algeria. Air Algérie ordered seven aircraft, taking its B737NG fleet to 22, while Tassili Airlines signed an agreement for four aircraft.

Embraer too, has had a modestly successful Dubai Air Show, with Oman Air ordering five E175s (including one for the Omani Police Force) and also confirming an order from Air Astana for two E190s.

Middle East carriers have also boosted the aircraft interiors market. Etihad Airways signed an agreement with Lufthansa Technik to upgrade the First Class seating on the carrier’s fleet of A340s. It will also upgrade the inflight entertainment on its A330s and B777s in a deal with Panasonic. The carrier also awarded International Aero Engines a comprehensive engine MRO service for 12 A320s and 2 A319s.

Engine manufacturers have signed a number of major deals. Rolls-Royce received a USD1.5 billion order from Air China for Trent 700 engines to power 20 A330s. It will also supply its Trent XWB engines for Ethiopian Airlines’ 12 A350 XWBs.

Rolls-Royce was up 0.9% at the close of trading on Tuesday. 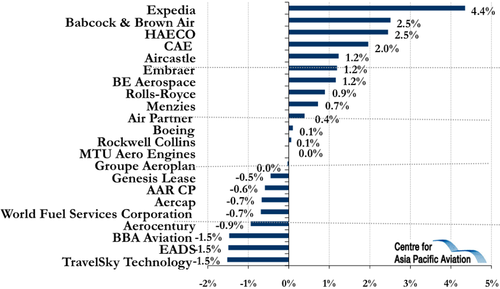