North and South American airline stocks plummeted on Tuesday (23-Nov-2010) with wider markets, as investors expressed concern over the North Korean shelling of South Korea and economic issues in Europe. The Dow ended the session 1.3% lower.

LAN Airlines (-1.4%) declined as Chile’s IPSA (-0.7%) fell for the day. The decline was despite subsidiary LAN CARGO announcing that due to the increase in the demand for air cargo transportation resulting from the strong economic recovery its markets, the carrier plans to accelerate its growth plan by incorporating three leased B767-300F into its fleet.

The first aircraft will be inducted at the beginning of this month, the second during Dec-2010 and the third in Jan-2011. The carrier has also announced an agreement for the option to purchase a new B777F. This aircraft is expected to join the carrier's fleet during 4Q2012. By the end of 2012, the company and its affiliates ABSA, LANCO and MAS AIR will operate a fleet of ten B767-300F, four B777F and two B767 that are under sublease to a third party.

Elsewhere, Hawaiian Airlines (+4.2%) and Air Canada (+06%) were the only carriers to end the session higher. Hawaiian gained after Stifel Nicolaus initiated coverage of the carrier with a "buy" rating and a price target of USD10.50. The carrier ended trading at USD7.27 and has a 52-week range of USD4.69-8.15

In other news, Air Transport Association of America (ATA) reported a 5.7% year-on-year improvement in passenger numbers for Oct-2010 to 45.4 million. The rise was led by a 12.6% gain in international passenger numbers to 5.9 million, while domestic passenger numbers were up 4.8% to 39.5 million. Load factor was up 0.8 ppts for the month. 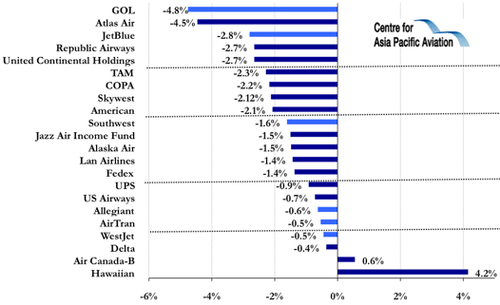