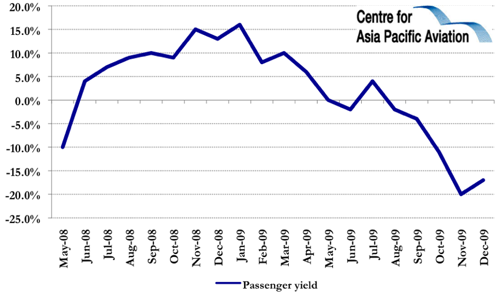 Dec-2009’s year-on-year yield reductions are related to the removal of fuel surcharges that covered 2008’s record high fuel prices. The yield figure also reflects the LCC’s significantly adjusted route portfolio (the carrier added a total of 63 routes in 2009) and the introduction of new aircraft with higher capacity and lower unit costs (these factors are estimated to account for approximately 70-80% of the yield reduction, according to the carrier). The yield contraction also comes off a strong base, with yield growth of 13% in Dec-2008.

The yield reduction was partially offset by a 2 ppt increase in load factors to 76%. Also in the period, passenger numbers were up 25% to 816,000 (in the full year, the carrier handled 10.8 million passengers. an 18% year-on-year increase).

The carrier’s unit revenues were also down by double digits, to NOK0.42 (EUR 5.14 cents) in the month, for the second largest monthly year-on-year contraction since the carrier commenced reporting monthly unit revenue data in Apr-2009. 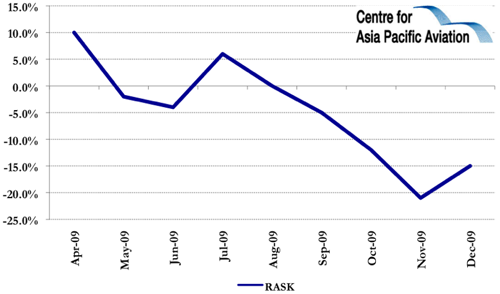 Eight months of PRASM reductions in Dec-2009 for JetBlue

JetBlue reported a 3% reduction in passenger revenue per available seat mile (PRASM) for Dec-2009 (off last year’s positive base of 15%), for eight consecutive months of PRASM reductions. 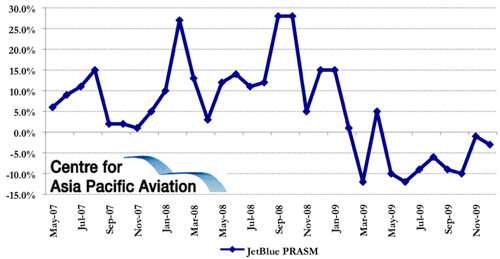 Also in the month, the carrier reported a 6.4% increase in revenue passenger numbers to 2.0 million, as traffic (RPMs) increased 7.5% on a 6.6% capacity (ASMs) increase, resulting in a 0.6 ppt load factor improvement to 80%.

The carrier noted that, following the termination of talks with Boeing for a 200 aircraft order in Dec-2009, planned capital expenditure will now decline from EUR1.2 billion in the current year to as little as EUR100 million p/a in the fiscal year ending Mar-2013. Accordingly, the carrier expects current cash reserves of EUR2.5 billion to grow substantially by Mar-2013, and plans to distribute surplus cash to shareholders from that date.

The carrier also stated that over 50% of the carrier’s anticipated fuel needs for FY2011 have been hedged at approximately USD720 per tonne. The carrier also denied speculation that it is preparing another bid for Aer Lingus, stating a third bid by the carrier remains ‘highly unlikely’. 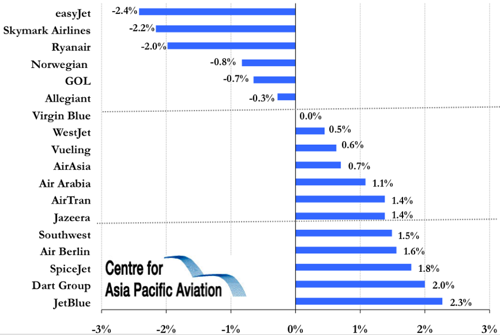