Shares in JetBlue surged 8.0% yesterday as the carrier reported robust traffic and revenue growth in Mar-2010, reflecting a recovery in domestic travel demand. The carrier stated PRASM increased 17% in the month, (compared to an estimated 1-3% increase in Feb-2010) and a 6.9% increase in revenue passenger numbers, to 2.1 million. Load factors also improved 2.0 ppts to 81.3%.

Meanwhile, Republic Airways selected the Frontier Airlines name for its consolidated branded network in favour of the Midwest Airlines brand. The airline stated that “research showed that customers preferred the Frontier brand”.

Republic purchased Midwest Airlines in Jul-2009 and Frontier Airlines in Oct-2009. Since then, the two carriers have operated as partners with the goal of eventually integrating into one carrier. Looking forward, 2010 growth plans for the new, combined carrier includes ten new destinations from the Denver hub and five new destinations from Milwaukee, resulting in a full-year capacity (ASMs) increase of 7% in 2010, which it claims is “three times the industry average”. Republic expects the integration process to take 12-18 months.

In other US LCC news, US Transportation Secretary, Ray LaHood, described Spirit Airlines' proposed charge for carry-on bags as "ridiculous" and "a bit outrageous", adding, "I’ve told our people to try and figure out a way to mitigate that".

Spirit Airlines CEO, Ben Baldanza, last week defended the carrier’s decision, stating the charge will eliminate delays, as the carrier identified "excessive carry-on baggage as the number one controllable reason that our planes were being delayed at the gate".

In the South American market, GOL Linhas Aéreas Inteligentes and Delta Air Lines filed a request with with Brazilian and US authorities for approval to implement a codeshare agreement. The move will initially allow Delta to codeshare to more than 45 GOL services departing from Brasilia, Rio de Janeiro and São Paulo to other Brazilian destinations, as well as two GOL services between Brazil and Paraguay and Uruguay. GOL recently expanded its codeshare agreement with American Airlines. 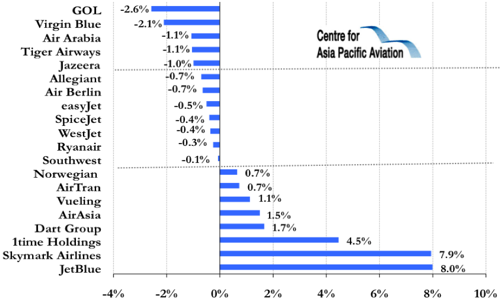