Shares in JetBlue gained 2.0% yesterday, after gains of nearly 7% in early trading, following upgrades and ‘buy’ ratings from Bank of America/Merrill Lynch, Hudson Securities and Deutsche Bank, as follows.

Bank of America/Merrill Lynch upgraded the LCC’s shares from ‘neutral’ to ‘buy’, stating the carrier is benefiting from strong peak-demand months and adding that the carrier will also benefit from previous headwinds from its new reservation system and the construction of a new runway at New York JFK Airport. (The group believes schedule strength at JFK will lead to continued improvement of the carrier’s business mix, while its market share gains at Boston will similarly enhance the high yield mix).

Merill Lynch commented, "in recent quarters, JetBlue's yields have positively surprised during peak demand months when management can more easily get passengers to trade up fare classes”. The firm increased its price target from USD6.50 to USD11 per share.

Similarly, Hudson Securities raised its rating on the budget carrier from ‘sell’ to ‘neutral’, citing the pilot strike at rival Spirit Airlines. JetBlue overlaps with Spirit in eight markets from Fort Lauderdale, according to Hudsons, which commented, "revenues captured from Spirit flying could provide modest upside".  (Hudson added that American Airlines is likely to see the largest benefit from the strike).

Spirit has cancelled all services between 12-Jun-2010 and 16-Jun-2010, as the carrier's 440 pilots represented by the Air Line Pilots Association (ALPA) walked off the job on 12-Jun-2010 after the mediated talks failed to bridge differences with management over pay, scheduling and benefits. Pilots of Spirit Airlines, the largest carrier at Fort Lauderdale International Airport operating a network of approximately 150 daily services to 40 cities mainly in Eastern USA, the Caribbean and Mexico, have reportedly stated they would not return to work until a "fair and equitable" contract is negotiated. The two parties are reportedly set to resume negotiations today (15-Jun-2010).

Deutsche Bank initiated coverage of the US airline industry during trading on Monday, commenting that US airline stocks have benefited “disproportionately from an improving economy due to their significant operating leverage”.

In South America, shares in GOL slipped 0.8% on Monday.

Meanwhile, there have been reports that Brazil has tightened rules on flight delays, shortening the time airlines are required to provide passenger assistance, such as access to free food and telephone and internet.  The National Civil Aviation Agency (ANAC) has also reportedly established fines for airlines that fail to comply with the new regulations, ranging from USD555 to USD1,800 per case.  The new regulations mandate immediate fare reimbursement when flights are either cancelled or delayed more than four hours, compared with the previous regulations, which enabled airlines to pay the reimbursements within 30 days. 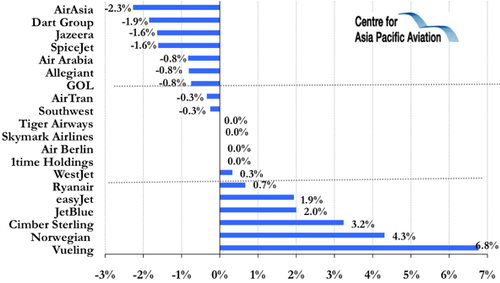