It was a mixed day of trading for North and South American airline stocks on Monday (22-Nov-2010) as investors were torn between what is expected to be a strong Thanksgiving travel season for airlines and a rebound in oil prices (+0.3%) to USD81.79. After their largest weekly loss in three months, there was optimism that Ireland's application for a bailout from the European Union and the International Monetary Fund may reduce European sovereign-debt concerns.

Oil prices declined at the end of last week after China ordered banks to raise reserves in a move that may slow growth and fuel demand in the world’s largest energy-consuming country.

Delta Air Lines was flat for the day despite news the US Department of Transportation (DoT) has requested more information from Delta and Virgin Blue over their proposed trans-Pacific JV. Requested information includes their latest passenger and fares data to “substantiate their assessment that market conditions have stabilised”. DoT made an initial tentative decision to deny the application in Sep-2010.

Also during trading, Delta received notification from the National Mediation Board (NMB) that an overwhelming majority (73%) of TechOps Stores employees voting in the Stores representation election rejected representation by the International Association of Machinists (IAM). There were 607 votes cast – 439 "no" votes, 166 votes for IAM and two write-in votes. There were 673 eligible voters.

The group was the eighth to reject IAM’s representation. Delta stated it is now ready to commence the process of aligning pay, benefits and work rules for different group’s within the company into one team. 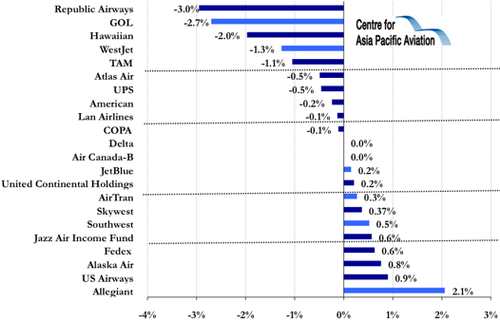