The majority of North and South American carriers’ stocks were up on Monday (29-Mar-2010), moving with the wider market, with the Dow (+0.4%) pushed higher by energy and mining stocks. The airline gains came despite a 2.3% rebound in oil prices, to USD82.17.

Delta Air Lines (+1.0%) gained after stating it expects an operating margin of 1-2% for 1Q2010, while cargo and other revenues will total USD1,100 million. Cost per ASM for the period is expected to increase 1-2% year-on-year for the period. Its fuel hedge position totals 47%.

In terms of traffic, Delta decreased capacity (ASMs) by 4-5% for the period, including a 2-3% decline in domestic capacity and a 7-8% decline in international capacity.

In terms of traffic, the carrier expects a 1.7-2.7% increase in passenger traffic (RPMs), while capacity will be down 3.4% for the period.

Continental Airlines was flat after stating it expects load factor of between 79-80% during the quarter, including mainline load factor of 80-81%. The carrier reduced capacity by 0.2% year-on-year for the period, with a 1.6% reduction in domestic mainline capacity and a 1.5% increase in international mainline capacity. Continental also expects cost per ASM to total USD 12.18-12.23 cents.

Air Canada (+3.8%) was also up. During trading, the Canadian Federal Court issued an order allowing Air Canada to challenge the Toronto Port Authority's announced decision to engage in a process that would discriminate against airlines wishing to serve the Toronto City Centre Airport and to seek an order requiring the TPA to properly allocate available slots at the airport. A hearing on the carrier's application has been scheduled for 06/08-Jul-2010. 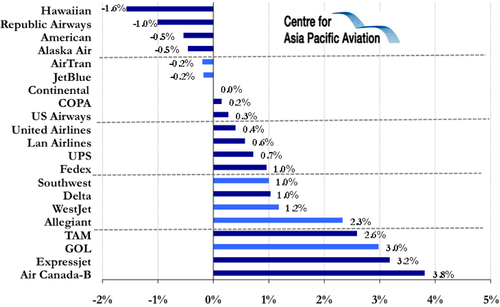