North and South American carriers’ stocks were mixed on Thursday (22-Oct-2009), with AMEX Airline Index (+0.5%) rising only slightly as a result. Stocks were affected by the further release of carriers’ 3Q2009 financial results and a gain in the wider market, with the Dow ending trading up 1.3%. Oil prices (-0.2%) meanwhile slipped, to USD81.19.

The result exceeded analyst expectations, with Thomson Reuters stating analysts on average expected the carrier to make a profit of USD2.26 per share.

The carrier attributed the loss to special charges and weak yields. As a result, the carrier stated it remains cautious of the stability of the US economy.

Delta CEO, Richard Anderson stated "our ability to earn a profit for the quarter shows we are making sound decisions for our business in this difficult economic environment. While we now see encouraging revenue and booking trends, we remain cautious in these early stages of an uncertain recovery."

The carrier stated it is seeing “strong evidence” of improving Business demand and the carrier’s revenue environment. CEO, Doug Parker stated "as we look out into an improving demand environment, we believe we are in excellent position to capitalize on a recovering economy,"

Mr Parker added that while the outlook is promising, the downturn is not yet over, stating "I think those of us that are around have made it through a very difficult time. But it's not over. What has to happen is we have to get this industry back to profitability. The standard can't just be survival. We passed that standard. But there's a higher standard out there, which is getting actual returns for investors on their investment. That standard we have not gotten to, and have a long way to go yet to get there." 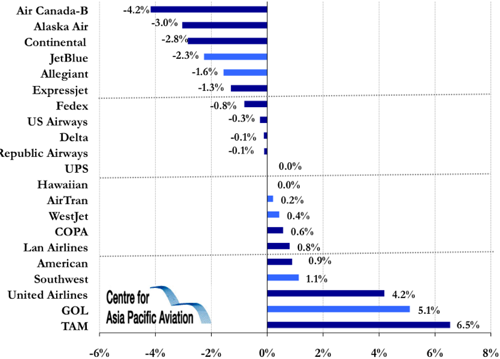