North and South American airline shares plunged on Monday (04-Oct-2010) as analysts downgraded ratings for a number of carriers, fuel prices rose and the wider market fell. The Dow (-0.7%) fell as investors expressed caution ahead of the start of the 3Q2010 reporting season and new jobs data.

Delta Air Lines (-4.2%) was also down after Raymond James & Associates downgraded its rating of the carrier’s stocks from "outperform" to "market perform", based on expected increased competition from Southwest’s acquisition of AirTran. Analyst, Duane Pfennigwerth, stated Southwest’s entry into Delta’s largest hub, Atlanta, would result in a “significant change in the competitive landscape, which should not be downplayed”.

Raymond James & Associates also reduced its rating of AirTran from "outperform" to "underperform", stating there is limited upside to Southwest’s takeover of the LCC and Southwest’s offer is unlikely to be countered. AirTran ended trading flat. The carrier reported a 1.4% year-on-year rise in passenger numbers for Sep-2010 during trading, to 1.8 million. Load factor also rose, up 0.7 ppts, to 77.7%.

Meanwhile, Soleil Securities initiated coverage of United Continental Holdings (-2.4%), United Airlines and Continental Airlines’ newly merged entity, at "buy" with a price target of USD31.00. Soleil stated it sees the new carrier “as having the best balanced route network in the US, and arguably the global, industry and also see it as having superior aggregate exposure to the fastest growing international markets in the Pacific and Latin America”. The analysts estimate the carrier to report earnings per share (EPS) of USD4.65 for FY2010 and USD5.00 for FY2011. Stifel Nicolaus also initiated coverage of the company at "buy", with a price target of USD40.00, while Hudson Securities rated the carrier as "buy" with a price target of USD35.00. UAL ended trading at USD24.10. 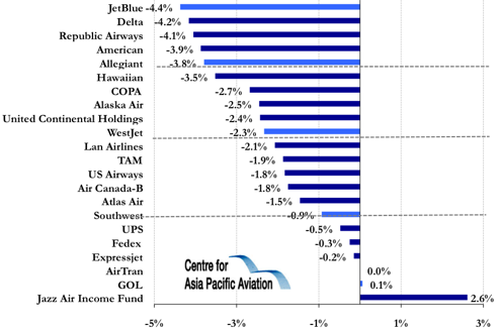