The majority of North and South American airline shares declined on Monday (19-Jun-2010) after Delta Air Lines stated it does not expect to grow much over the next year. In comparison, the Dow (+0.6%) rose on news of improved financial results from Halliburton and a stronger order outlook from Boeing.

The climb in the Dow was despite disappointing financial results from other companies and a greater than expected decline in homebuilder sentiment for Jul-2010.

Delta Air Lines (-2.9%) took one of the biggest falls of the day despite reporting its largest quarterly profit in ten years for the three months ended 30-Jun-2010. The carrier finished 2Q2010 with a net profit of USD467 million, or USD0.55 per diluted share, compared to a net loss of USD257 million in the previous corresponding period. Operating profit was also up, rising to USD852 million for the quarter, compared to USD1 million in the previous corresponding period.

Delta attributed the improvement to a rise in international traffic and an increase in Business fares. However, CEO, Richard Anderson, stated the revenue environment is “good, but not great”. The airline expects to be solidly profitable for the year, but it plans to retire some of its aircraft this year and does not expect to expand much in 2011.

United Airlines (-0.8%) slipped, despite analysts expecting the carrier to post its first quarterly profit for 2Q2010 since 3Q2007. On average, analysts surveyed by Thomson Reuters expect United to report a profit of USD1.74 per share on USD5.1 billion in revenue. The carrier reported a loss of USD57 million, or USD0.39 per share in 2Q2009. 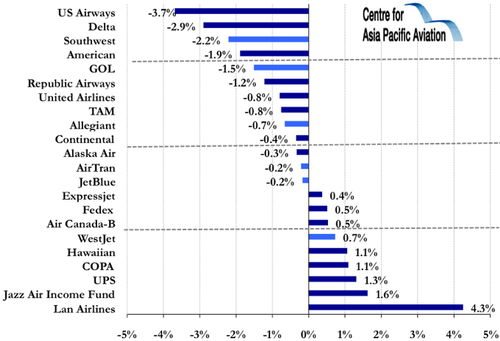