Delta Air Lines makes changes in Boston, adding routes where it has positions of strength

A modest push by Delta Air Lines out of JetBlue’s fortress in Boston during 2014 raised questions about the mega airline’s intentions for Boston, and if its moves signalled heightened competition with the airport’s largest airline JetBlue.

Over a year later the two airlines appear to be coexisting peacefully in Boston, leveraging their respective strengths as the airport’s two largest airlines. JetBlue has roughly 125 daily departures from the airport, pushing forward to its goal of 150.

Delta, meanwhile, appears to be making minor changes in Boston, leveraging new markets where it has areas of strength and shedding routes that may not be working within the larger context of its network.

JetBlue uses its network strength in Boston to bolster its partnerships

JetBlue began building up Boston as a focus city around the 2007 timeframe after launching flights from the airport in 2004. Part of its strategy in Boston was to court corporate travellers to diversify its VFR/leisure passenger base to balance out the seasonal troughs associated with those customer segments. Recently the airline stated that its margins in Boston for the 12 months ending 31-Mar-2015 expanded three points more than its system average. 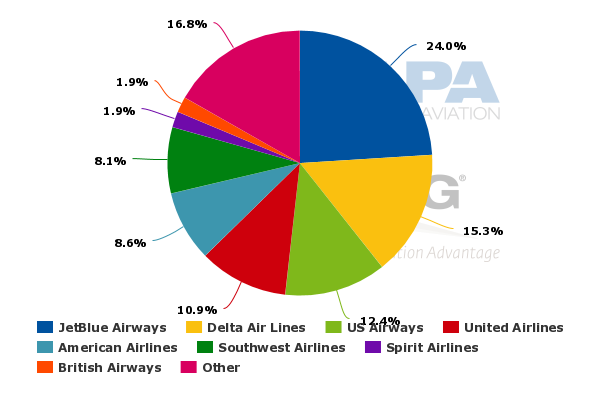 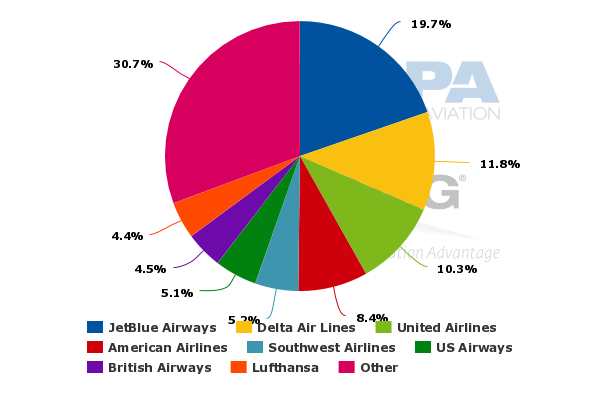 JetBlue has used its network utility in Boston to broaden its partnerships. One of the most notable and high profile examples is its codesharing pact with Emirates, which launched flights between Boston and Dubai in Mar-2014 and plans to add a second daily flight in Nov-2015. The day Emirates launched its Boston flights, JetBlue added service from Boston to Delta’s hub in Detroit.

At the end of 1Q2015 JetBlue CEO Robin Hayes remarked that “we’re seeing traffic from around our network flow through Boston onto Emirates and other networks at a rate well above our expectations”. Mr Hayes also highlighted that after JetBlue joined Delta in serving the Boston-Detroit market, fares dropped 39% and passenger traffic more than doubled. 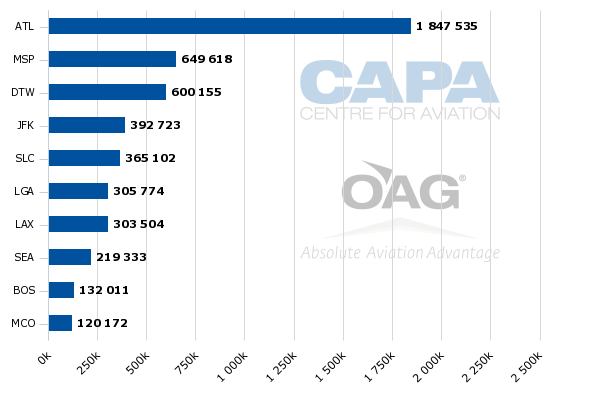 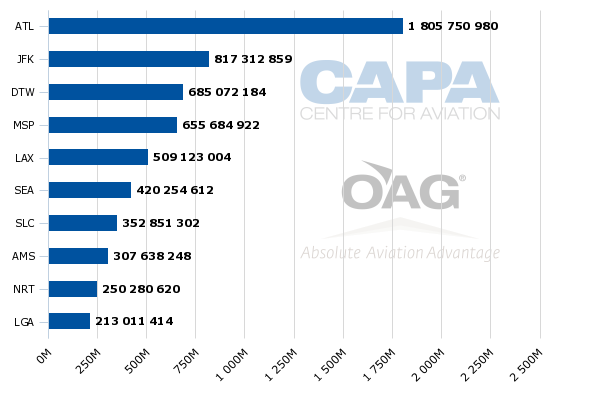 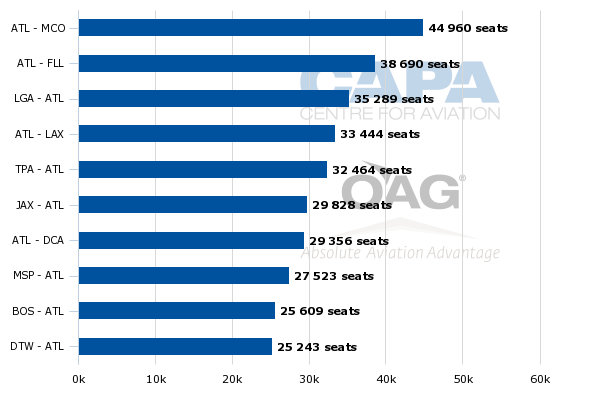 Other long-haul trans-Atlantic service from Boston includes Iberia's service to Madrid, Lufthansa's flights to Munich and Frankfurt, Aer Lingus' service to Dublin and Shannon, SWISS flights to Zurich, Alitalia to Rome, Turkish to Istanbul and Sata International flights to Lisbon.

Delta appears to make some changes to its Boston offerings.....

In 2014 Delta added new flights from Boston to Jacksonville, Richmond and Las Vegas in addition to once-weekly service to Nassau and Providenciales. Schedules from CAPA and OAG for the week of 15-Jun-2015 to 21-Jun-2015 show that Delta is not presently offering service to Jacksonville or Las Vegas.

JetBlue’s one-way seat counts between Boston and Jacksonville have remained flat year-on-year at 1,400. In the year prior, Delta offered roughly 540 one-way seats in the market.

JetBlue was already serving Boston-Las Vegas when Delta entered the market, and Spirit Airlines launched flights on the route in Apr-2015. During the week of 16-Jun-2014 Delta offered roughly 480 one-ways seats in the market versus 2,100 operated by JetBlue. A year later, JetBlue has increased its seats on offer to about 3,000, and Spirit is offering approximately 1,015 seats.

....opting to leverage markets where it has a stronger presence

Delta seems to be making some tweaks in its Boston markets into points where it has a greater position of strength. Although it is Las Vegas’ second largest airline behind Southwest, it represents only 8.5% of the airport’s seats and roughly 10% of its ASMs.

In Jun-2015 Delta launched service from Boston to Milwaukee, joining Southwest on the pairing. Delta presently holds a 23% share of the roughly 2,356 weekly one-way seats deployed in the market and Southwest holds the lion’s share at 77%.

Similar to Las Vegas, Delta is the second largest airline operated at Milwaukee, but its seat share is greater at 26%, and its share of ASMs is 16%. Its larger presence in Milwaukee gives Delta more leverage in capturing passengers for its new service to Boston. And unlike Southwest, Delta can market one-stop connections for Milwaukee passengers to European destinations it serves from Boston. 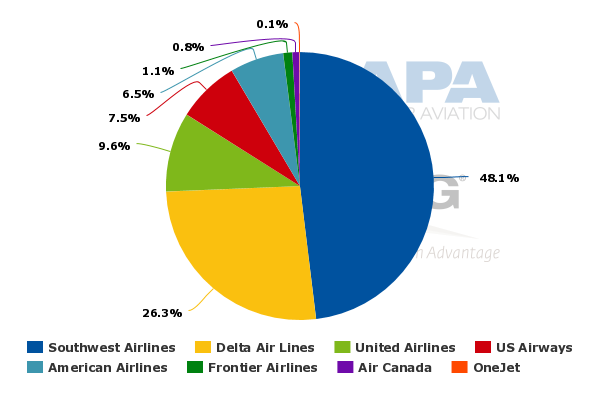 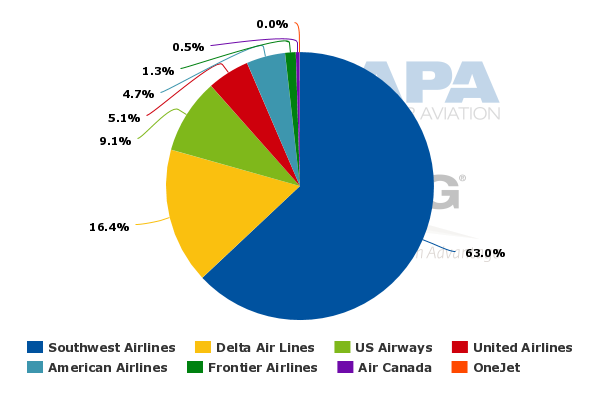 It is not surprising that Delta is joining JetBlue and Alaska on flights between Boston and Seattle scheduled to begin in Apr-2016. Delta has been making a massive push from Seattle during the last few years to support its new long-haul flights from the airport to Asia and Europe. Seattle has risen to become Delta’s main Asian gateway, and the airline has been adding numerous domestic and some transborder flights to feed its long-haul service. Its flights from Seattle to Asia include, Beijing, Hong Kong, Shanghai, Seoul, and Tokyo Haneda and Narita.

For the week of 15-Jun-2015 to 21-Jun-2015 Delta represents 21% of Seattle’s seats and 27% of the airport’s ASMs. As it works to flesh out its network from Seattle, Boston is likely a key market for Delta to enter. Seattle passengers have access to direct flights to Amsterdam, Paris, Frankfurt, London Heathrow, and Reykjavik on Delta and other airlines, and Boston has won new service to Asia during the last couple of years with flights operated by Japan Air Lines to Tokyo Narita, Hainan to Shanghai and Beijing and Cathay Pacific to Hong Kong. So it seems that Delta may be aiming to tap into O&D passengers on its new service between Boston and Seattle. 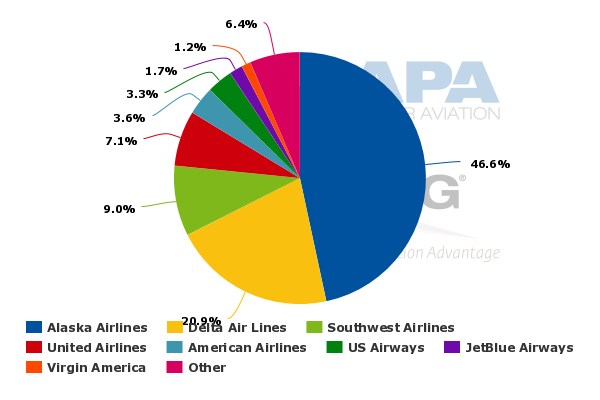 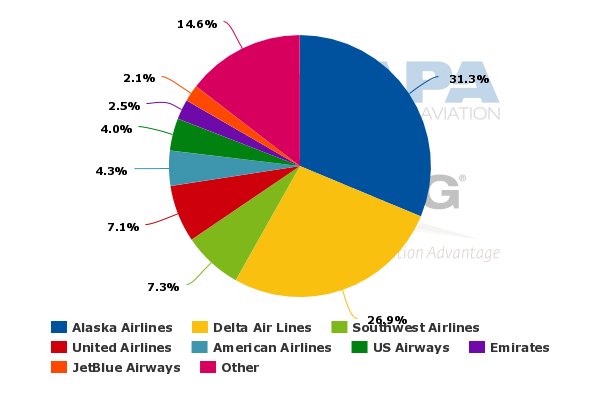 Delta’s moves in Boston during the last couple of years seem less about increasing competition with JetBlue and more focussed on leveraging its position in the market to connect Boston with its large hubs and, in some cases, perhaps point to point business markets that have the potential to generate favourable returns.

Given the returns that Boston is driving in JetBlue’s network, it seems as if JetBlue and Delta are coexisting in the market.

Boston will never rise to the same level of importance in Delta’s network as it holds in JetBlue’s route offerings; but Boston definitely plays a strategic, albeit small role in Delta’s non-hub network strategy.