Delta Air Lines (-3.3%) led North and South American airline stocks lower on Tuesday (30-Nov-2010). The decline was despite CEO Richard Anderson stating, in the long-term, the carrier hopes to work with China Eastern Airlines and China Southern Airlines to establish a JV company. “China is the world’s fastest growing aviation market and is expected to maintain double-digit growth over the next few years,” he said.

Copa Airlines was flat despite South American stock markets falling for a fourth consecutive day. During trading, the carrier announced an order for 22 B737-800 NGs from Boeing, with options for a further 10. The aircraft, valued at USD1.7 billion at list prices, are to be delivered between 2015 and 2018. The order is the largest new aircraft order in Copa Airlines' history and will nearly double Copa's B737 NG fleet.

In the past two years, Copa has purchased 37 B737-800 NGs new from Boeing and entered into leasing agreements for an additional 10. CEO Pedro Heilbron stated the aircraft are part of the carrier's medium-term growth plan. The order previously was attributed to an unidentified customer on Boeing's orders and deliveries website.

The decline in US airline stocks for the day was despite Stifel Nicolaus analyst Hunter Keay stating he expects Nov-2010 traffic figures for airlines to be strong, considering the relatively “event-free travel period” for Thanksgiving. He added “airline management teams were optimistic about booking patterns through 2010 and even into next year”.

The analyst noted that a number of carriers, including JetBlue (-1.5%), are reporting some of the highest PRASMs in nearly 12 months. Mr Keay expects carriers to maintain these levels through Dec-2010. 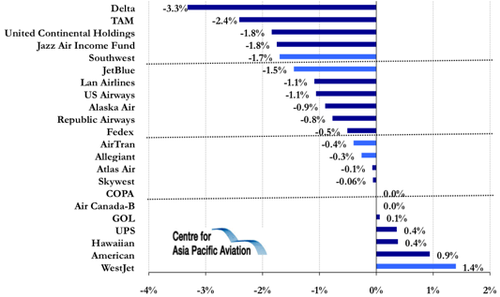