The wider market was relatively flat, despite encouraging news that US wholesale inventories unexpectedly fell in Jan-2010 and sales reached their highest point in over a year. Banking and technology stocks also pushed markets higher.

Delta Air Lines (+3.8%) gained after Jesup & Lamont analyst, Helane Becker, narrowed her 1Q2010 loss estimate for the carrier from a loss of USD0.41 per share to our new estimate of a loss of USD0.12 per share. However, it was noted that if Mar-2010 ends strongly, the airline could “certainly be profitable”.

The new estimate came after the carrier updated its 1Q2010 guidance. Jesup & Lamont stated the key in the new guidance was that the carrier now projects an operating margin of 1-2%, compared to previous expectations of breaking even.

American, Continental, United, Alaska Air (+5.6%), US Airways and Southwest (+1.1%) were all up after analysts at UBS lifted its price targets for the carriers’ stocks. Increases were as follows:

UBS analyst, Kevin Crissey, forecast unit revenue for legacy carriers in Mar-2010 will be up approximately 17% year-on-year. However, according to Mr Crissey, improvement among carriers has not been even, with United and Alaska being stand-out performers. Jesup & Lamont stated they are estimating earnings per share (EPS) of USD3.77 for Alaska, including a 1Q2010 EPS estimate of USD0.09 per share.

LAN (+2.2%) also rose after Banchile Inversiones raised its price target for the carrier and reiterated its ‘Buy’ rating.

Air Canada (+6.7%) also witnessed significant gains for the day as it outlined its case against further rights for Dubai's Emirates, while Republic Airways (-1.2%) was down. 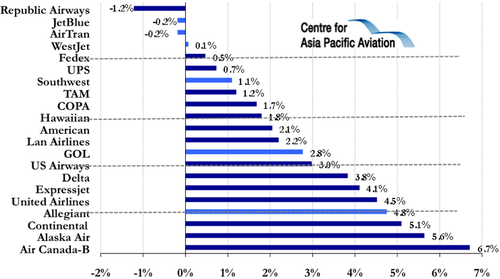