The majority of North and South American carriers' stocks were up again on Monday (14-Sep-09), after Delta Air Lines (+6.7%) increased its operating margin forecast for 3Q2009.

As a result, a number of analysts altered their own outlooks for the carrier. Jesup & Lamont Securities raised their 3Q2009 earnings forecast for the carrier to a profit of USD0.05 a share, from a previous estimate of a loss of USD0.30 a share, and reiterated its “buy” rating for the carrier, citing its improved load factor.

JP Morgan also improved its forecast to a loss of USD0.01 per share in 4Q2009, from its earlier estimate of a loss of USD0.26 a share, stating it believes US carriers are “in the process of turning a financial corner".

Moody’s meanwhile revised its outlook for Delta to “Negative” from “Stable”, and affirmed its B2 Corporate Family rating of both Delta and Northwest combined, with a “Negative” outlook.

Southwest (+2.1%) also rose. CEO, Gary Kelly, stated after trading on Friday (11-Sep-09) that “things feel like they have stabilised, and it feels like our business is picking up some”.

Expressjet down, TAM up

Expressjet (-7.9%) stocks took a dive after it also reported its Aug-2009 traffic. The carrier reported a load factor of 79.8% for its services operating under Continental Express.

Shares in TAM (+4.7%) were up on Monday, despite reporting a 4.9 ppts year-on-year fall in both domestic and international load factors for Aug-2009. Domestic traffic (RPMs) fell 1.7% year-on-year, while international traffic was far more positive, up 16.8% for the month. 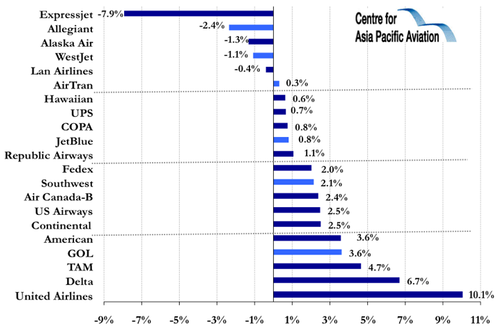