Delta cabin crew to vote on unionisation; Air Canada to decide on new aircraft in next year

North and South American airline stocks boomed after Southwest Airlines announced plans to acquire AirTran. The gains were despite a decline in the Dow (-0.4%), pushed lower by the financial sector on concerns over a Moody's Investors Service downgrade of an Irish bank’s debt.

Delta cabin crew to vote on unionisation this week

Delta Air Lines (-2.7%) declined after CEO, Richard Anderson, called on the carrier’s cabin crew to maintain a direct relationship with the carrier, as the staff prepare to vote on whether to unionise with Association of Flight Attendants (AFA) next week. Mr Anderson stated there has been “acrimony” at other airlines whose staff have been represented by the AFA and its work at other airlines “hasn’t stopped layoffs, hasn’t stopped concessions”. He also commented that pre-merger Northwest Airlines attendants contract under AFA is “substantially inferior” to Delta’s cabin crew contract.

Air Canada to decide on new aircraft in next year

Air Canada (+2.8%) CEO Calin Rovinescu, stated the carrier will decide within the next year as to whether it will stick to its Airbus, Boeing and Embraer series of aircraft or purchase new fuel efficient aircraft. The carrier also stated it will delay adding new aircraft until its B787s are delivered sometime after 2012. Air Canada previously announced plans to forgo replacing aircraft in favour of repaying almost CAD1 billion of debt.

Continental to remove complimentary meals from some economy services

Continental Airlines (+0.6%) was also up marginally. The carrier announced a new menu for purchase in economy class on select flights beginning 12-Oct-2010 with the new meals and snacks will be offered on many US/Canada  and certain Latin American routes. The new food-for-purchase menu will replace the complimentary meals and snacks currently served in the economy cabin on the select routes. Continental will continue to offer complimentary food in the economy cabin on all intercontinental and certain other international routes, and on long-haul domestic routes over six-and-a-half hours. Continental will also continue complimentary food service in the front cabin (first class and BusinessFirst) on routes worldwide. Traditional non-alcoholic beverages will continue to be complimentary on every Continental flight. 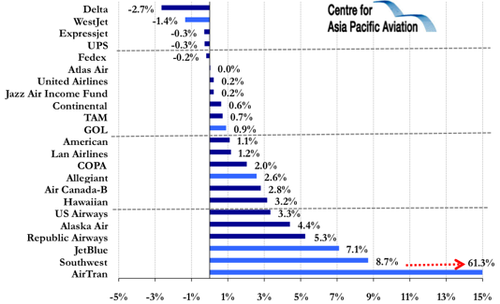