Deliveries up and orders down for Airbus and Embraer

European aircraft manufacturer, Airbus, and Brazil’s jet maker, Embraer, both announced record deliveries for 2009, but their order backlogs have also been suffering as carriers slashed ordering, put off options and deferred deliveries thorough 2H2008 and 2009.

Airbus plans to double A380 deliveries to 20 in 2010, although the manufacturer managed to deliver less than half of its original delivery target for the aircraft in 2009. A380 production is expected to be set at a steady two aircraft per month from 2H2009, with an existing order backlog of just under 180 aircraft.

Embraer delivered a record 244 aircraft in 2009, two more than its target for the year, but much of this increase was due to the launch of its new light jets, including delivery of 93 of the new Phenom 100 light business jet (52 of which came in 4Q2009).

For the year, Embraer delivered 122 commercial jets, 115 executive jets, and seven aircraft to the defense market. However, its commercial deliveries represented a 25% decrease from the 162 delivered in 2008, and the value of the manufacturer’s firm order backlog is dropping fast. 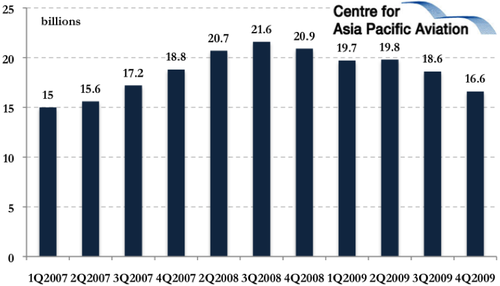 Commercial aircraft in the Brazilian manufacturer’s firm order backlog dropped from 306 aircraft in 3Q2009 to 265 aircraft at the end of the year. The majority of these are for E190 regional jets.

A320 leads the way for Airbus

Airbus’ order book was somewhat more healthy. The manufacturer booked 310 gross orders in 2009 (surpassing its target of 300), but net orders fell to 271 after cancellations. This figure puts it firmly ahead of Boeing in the orders race for the year, with the US company registering 263 gross and 142 net orders in 2009, as well as 481 deliveries. Airbus stated it secured 54% of all commercial aircraft orders over 100 seats, the same market share as in 2008.

Most of Airbus’ orders (228) were for A320s, while there were 45 A330 orders, 22 A350 XWB orders and four A380 orders. Airbus’ A340 appears to have dropped completely out of favour with airlines, with no orders and eight cancellations (including one non-commercial cancellation) over the year.

Airbus logged 85 new orders in Dec-2009, its best month for the year, and another sign that airlines are looking to put the economic crisis behind them. Interestingly, Dec-2009 was also a bad month for cancellations, with Airbus losing eight orders (two A330-200s and four A340-600), taking the yearly total to 39. This total was however less than one third of the total cancellations in 2008, and a definite victory for Airbus.

Over the past 18 months, order cancellations and deferrals have affected 600 aircraft in Airbus’ orderbook for the 2009 to 2011 period.

The European manufacturer’s order book now sits at 3,488 aircraft, a reduction of 227 aircraft from last year’s record backlog of 3,715 aircraft. The value, at list prices, is USD437.1 billion. 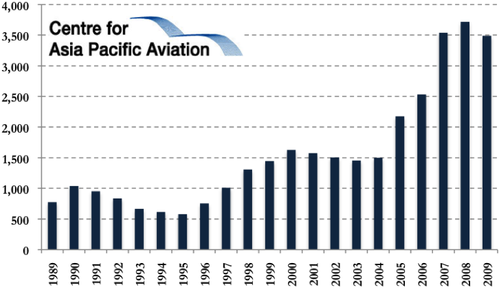