Dallas-Ft Worth Airport still dominated by American Airlines, but some new tails appearing

In the mid 1960s, when Dallas-Ft Worth International Airport was first envisioned, the airport’s Master Plan was frequently displayed as an overlay of Manhattan, with DFW being the larger map. Once completed, it was given its own postal (zip) code and became a bragging point for North Texans who like to dote on the generally big nature of all things Texas.

With seven runways, it is an airport that has no limitation on growth, and can easily handle peak period operations in excess of 126 hourly movements. But the sheer dominance of American Airlines has made it generally unattractive to the competition. For some years after its opening, Braniff Airways used the airport as a hub as well, but BN over-expanded early in deregulation and failed.

Until 2005, Delta also classified DFW as a hub and had a sizable operation at the airport. However, the proximity of Atlanta and the dominance of AA resulted in Delta’s departure; with DL now operating only to its current hubs. 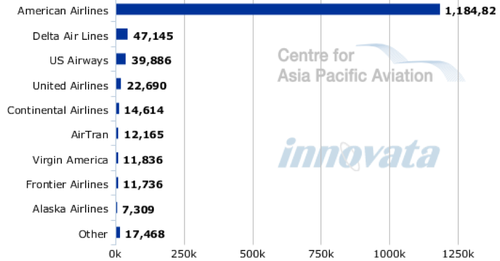 American Airlines' million plus weekly seats at DFW are supplied by roughly 770 daily departures by the airline and its affiliate carriers. All of the other airlines combined provide only 15% of the weekly AA seats.

As we have noted in the past, this kind of monopolistic control of airports is an American phenomenon, unthinkable even in foreign hubs that are key to their national carriers. And, as a result, oneworld is the dominant alliance. 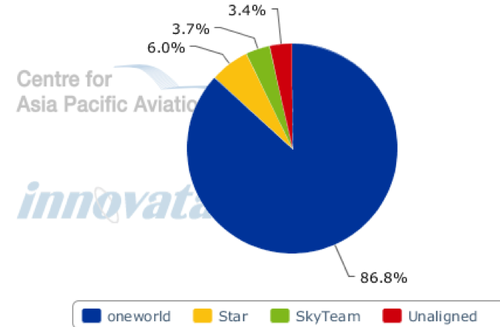 Similar to Delta and Atlanta, the only options offered by other US carriers are flights to their own hubs. Internationally, if one wishes to travel nonstop, there are 23 weekly opportunities (KL/AMS X 7, BA/LHR X 7, LH/FRA X 6, KE/ICN X 3). As from May there will also be service on Qantas to Sydney; but other than that, the flight designators are all AA. 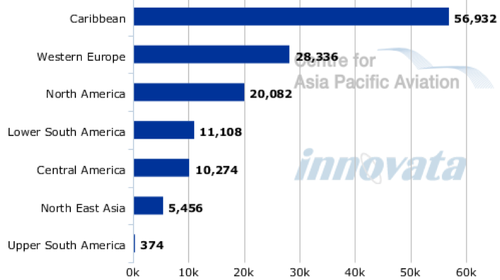 However, despite American’s flights to a number of global destinations, the airport is overwhelmingly domestic, with less than 10% of its weekly seats going beyond US borders. 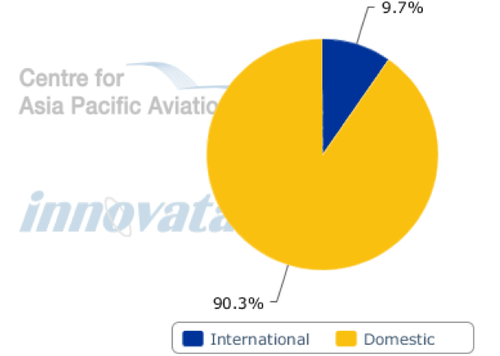 One is tempted to believe that a broader representation of foreign carriers is discouraged by the lack of feed opportunities at the airport. Even amongst its oneworld partners, AA dominates, operating all the Narita serve and 3 out of 4 Heathrow flights.

American is also relatively unchallenged at present by any low cost competition. While the Dallas metro population has plenty of service by Southwest, for now all of that competition is headquartered down the road at Love Field. But AirTran does have a foot in the door at DFW and as the merger with Southwest proceeds, more of the rivalry may move to DFW. 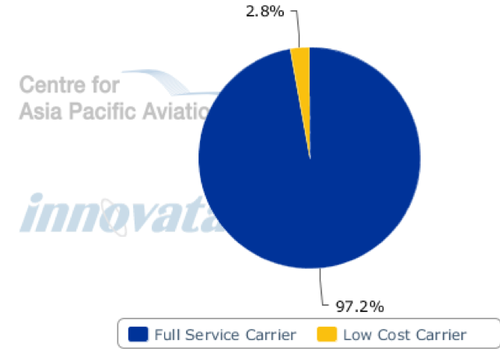 If the recent response by American to new service by Virgin America is any indicator, any attempt by Southwest to make inroads at DFW will face a fierce response.

While not an airport known for particularly high fares, there is evidence that competition will have an effect. Since the beginning of service by Virgin America to Los Angeles, the moving average fare level has steadily declined. However, since American operates so many nonstop routes without direct competition, even a lower fare is only a marginal advantage if the differential involves a connection and longer travel time. Click here for more DFW fares data.

Dallas-Ft Worth is an important airport. Cities in Texas and across the US SunBelt are growing and the population is shifting west and south, making DFW the home airport for a metro area that now numbers over 6 million - the fourth largest in the US and with 20%+ growth.

American understands the value of its dominance in such a market and has shown a willingness to defend that position over time. However, it is widely noted that AA is the weakest of the US majors and the only one to post a loss in 2010. Should there be any display of weakness by AA, the importance of the region, its industry, population and continued growth will have suitors lined up at the hint of any opportunity.