Copenhagen Airports' shares crash - one quarter of its value wiped off

Copenhagen Airports' (CPH) share price slumped 24.8% on 13-Nov-08 as the airport revealed a 3.9% drop in passenger numbers in Oct-08 to 1.9 million, including a 4.1% fall in international traffic. It has been a difficult few weeks for CPH following the collapse of LCC, Sterling Airlines, which accounted for approximately 10% of the airport's traffic.

While several airlines have moved quickly to fill the void left by Sterling, CPH estimates the likely impact in 2008 of the bankruptcy of Sterling will be a reduction of between 0.5% and 1.0% in annual departing passengers and a reduction in profit before tax of DKK50-60 million (EUR6.7-8.1 million).

But investors seem more concerned about the outlook for the troubled SAS (which accounted for 49% of total traffic before Sterling's demise - and more now). Lufthansa has ended takeover talks with SAS, whose business model is simply unsustainable.

Potential drastic cutbacks by SAS, which are increasingly essential for its independent long-term survival, are weighing on CPH investors' minds.

Macquarie Airports (MAp), a substantial shareholder in CPH, was caught up in the concern, falling 5.5% yesterday.

Elsewhere, Mexican and Chinese airports had a strong day, with the exception of Beijing. 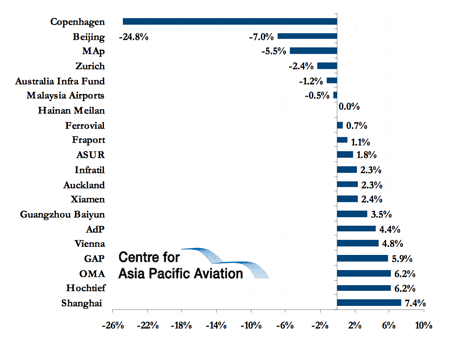