Copenhagen Airport’s shares rose 2.5% yesterday following the signing of a long-term agreement with the Danish Civil Aviation Administration on its airport charges.

The new agreement, which was approved by the majority of the approximately 60 airlines operating at the airport, will see the structure of charges at the airport change from 01-Oct-2009 and locked for the following 18 months. Thereafter, the charges will be increased 1% faster p/a than the annual increase in the Danish Consumer Price Index (CPI) for the next four years (see below).

European airport shares were generally up yesterday, with shares in Copenhagen's competitors, Zurich and Vienna also gaining 1.7% and 0.9%, respectively.

Airports of Thailand reported traffic results for its portfolio of airports in Aug-2009, which showed signs of a recovery, led by a resurgence in domestic traffic. Investors in the operator of the country’s main gateways, however, did not react quite as positively to the results, sending the shares down 2.8%.

Beijing Airport’s shares lost ground yesterday, falling 1.3%. On 13-Sep-2009, the airport signed a Memorandum of Understanding with Singapore’s Changi Airport Group allowing the airports to share information and knowledge and provides the platform for joint collaboration on projects. 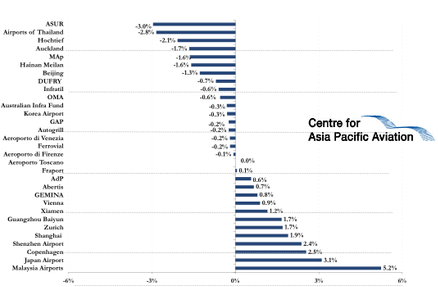 Copenhagen Airports (CPH) stated it has signed a long-term agreement with the Danish Civil Aviation Authority on the charges paid by airlines to use the airport.

The agreement strengthens CPH’s position as a Scandinavian hub. The majority of the approximately 60 airlines using CPH have approved the agreement, under which the structure of charges will be changed as of 01-Oct-2009 and the charges subsequently locked for the following 18 months. Under the agreement, CPH will invest more than DKK2.6 billion in infrastructure expansion and improvements over the contract period.

Copenhagen Airport CEO, Brian Petersen, stated “with a changed price structure, a reduction of the take-off charge for the largest aircraft and locked charges for 18 months, the agreement will serve to consolidate CPH’s position as the region’s key hub in the coming years.”

According to Mr Petersen, the agreement will strengthen one part of CPH’s strategy; to continually expand the hub and promote the development of intercontinental routes. The other part of the strategy, to ensure continual growth in the low-cost segment, will be provided for 2010 with the opening of the low-cost pier CPH Swift, where charges will be negotiated separately.

The existing charges agreement is due to be renewed by the end of the year, and under the new agreement charges will be locked from Oct-2009 until Apr-2011 in order to help airlines as well as the airport to overcome the current crisis. For the remainder of the contract period, charges will be subject to annual increases equivalent to Statistic Denmark's consumer price index plus one per cent. This means that the airlines know the level of expenditure well into the future.

In addition, CPH undertakes to invest more than DKK2.6 billion in the aeronautical part of the business, that is, in the expansion and improvement of infrastructure.

Mr Petersen added “over the coming five years we will invest some DKK500 million a year in baggage handling, jet bridges, gates and check-in facilities for the benefit of both airlines and passengers. These investments will serve to strengthen CPH in the mounting competition with other northern European airports.”

As the higher passenger charge is offset by the lower take-off charge and the transfer discount, the new agreement will not affect CPH’s revenue. Environmentally friendly agreement, a NOx-based emissions charge to be introduced as of 01-Apr-2010 is aimed at encouraging airlines to use more environmentally friendly aircraft. The details of the emissions charge have not yet been finalised.