In Europe, shares Denmark's Copenhagen Airport led the way down yesterday, closing 3.5% lower, following the operator's Annual General Meeting on Monday (22-Mar-2010). At the AGM, shareholders approved plans to distribute a dividend of EUR47.6 million or EUR6.06 per share for FY2009. Shareholders also elected Henrik Gürtler as Chairman of the airport and Max Moore-Wilton as Deputy Chairman.

Meanwhile, Spain’s Ferrovial, owner of BAA, gained 0.6%. The UK Department for Transport (DfT) has admitted a third runway at London Heathrow Airport will not provide as much in economic benefits as originally estimated. Its projection follows the introduction of a new assessment method for the cost of carbon dioxide emissions by the UK Government. DfT previously forecast the additional runway would provide the UK economy with GBP5.5 billion in benefits, based on the previous price of carbon and assuming flight numbers rose to 702,000 p/a. However, the DfT stated the economic case for the runway is still positive. 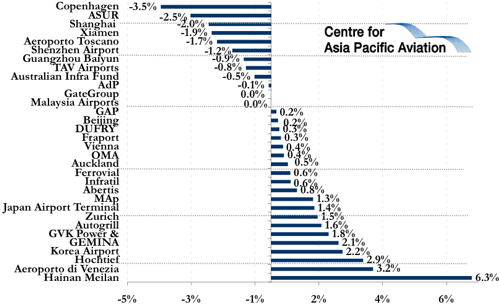