North American airline stocks rebounded on Thursday (12-Aug-2010), as oil prices dived 2.9%, to USD75.74. The gains were despite a decline in the wider market, with the Dow (-0.6%) falling on an unexpected rise in jobless claims last week.

It was the opposite in Latin America, with the majority of carriers down on disappointing financial results, while wider markets gained. Brazil’s Bovespa (+0.3%) rose for the first time in five sessions, following a string of recent reports expecting strong corporate earnings. Chile’s IPSA (-0.1%) dropped sharply in early trading but made some ground in the afternoon.

Yield was also down for the period, declining 2.5%, to USD 15.2 cents, mainly as a result of lower fares in Venezuela and the Colombian domestic market. However, passenger revenue per ASM rose 3.7% to USD 11.1 cents.

The carrier stated that going forward, it is “well positioned to seize future growth opportunities and will continue to strengthen what is arguably the most complete and convenient network for intra-Latin American travel and take advantage of its superior airport infrastructure”. The carrier expects RASM for 2010 to total USD 12.7 cents, a downward revision from USD 13.1 cents, but an increase from 2009 levels of USD 12.6 cents. It also expects average load factor of 77%, which is unchanged from its previous guidance, but an increase from 74.6% in 2009.

Despite missing its estimates, Citi announced it maintains a "buy" rating on Copa’s stock, with a price target of USD73. Citi had expected the carrier to report 2Q2010 earnings of USD0.67 per share, higher than the USD0.60 the carrier actually reported. The analysts stated the majority of Copa’s competitors find it difficult to match its service “in an economical manner”.

TAM, meanwhile, was flat after reporting a net loss of USD87.1 million (BRL154.1 million) for the three months ended 30-Jun-2010, compared with a profit of USD313.8 million (BRL555.1 million) in the previous corresponding period. 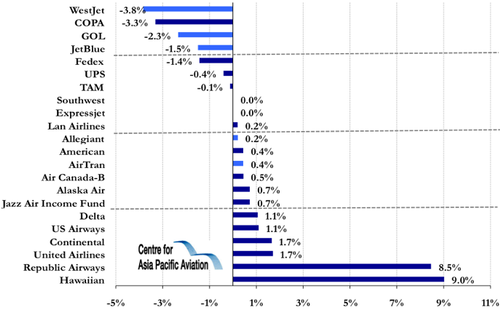