GOL (-2.5%) was also down for the day. During trading, GOL announced BlackRock has acquired a 5.09% stake in the carrier with BlackRock holding a total of 4.8 million preferred shares and 1.9 million American Depositary Receipts.

WestJet in talks with Emirates

WestJet (+1.4%) was one of the few carriers to gain for the session after CEO Gregg Saretsky stated the carrier is in discussions with Emirates about a potential agreement as part of its plans to expand its global network. Mr Saretsky added that Emirates is one of a number of airlines WestJet is talking to. No other carriers were mentioned.

WestJet, which expanded its relationship with Cathay Pacific this year and has initiated a partnership with American Airlines, hopes to add similar agreement at the rate of one per quarter until it has agreements with the remaining five global regions including the Middle East, Africa and South America.  The first step with any new partner would be an interline agreement, Mr Saretsky stated. 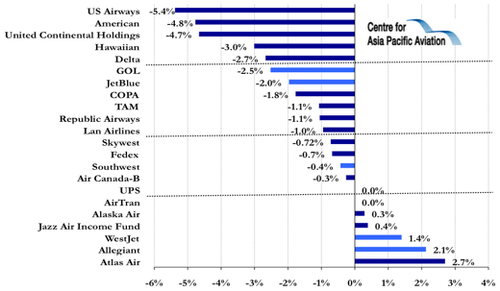