Copa Airlines (+1.0%) gained for Thursday (11-Nov-2010) as North and South American airline stocks ended trading mixed. Copa’s gains came ahead of releasing its 3Q2010 financial results. After trading, the carrier posted a 48.2% year-on-year rise in net income for the quarter, to USD63.9 million, or earnings per share (EPS) of USD1.45.

The results beat analyst expectations. According to TradersHuddle.com, Wall Street analysts expected a profit of USD1.24 a share on USD364.11 million revenue.

FedEx Corp (-0.6%) slipped despite announcing it expects to transport 16 million shipments around the world on 13-Dec-2010. It is an approximate 11% increase from its busiest day in 2009 when the company handled 14.2 million shipments. FedEx forecasts more than 223.3 million shipments will move through its global networks between Thanksgiving and Christmas.

American Airlines (+2.5%) and United Continental Holdings (+1.3%) were among the top gainers for the day. 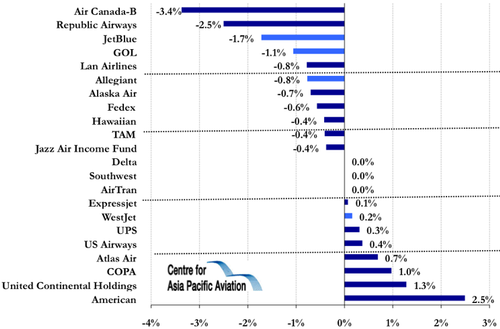