China Southern Airlines’ shares slipped 2.7% yesterday, following a 6.5% gain on Monday (which was the largest gain in three weeks), as the Chinese Government moved to loosen controls on the exchange rate, allowing the Yuan to strengthen against the US Dollar.

Similarly, shares in Air China slipped 0.6% yesterday, after surging 6% to a two-year high in Hong Kong trading on 21-Jun-2010.

In Southeast Asia, shares in Thai Airways gained 2.8%, while Singapore Airlines and Malaysia Airlines remained flat. In the South Pacific, Qantas, Air New Zealand and Virgin Blue shares all declined, by 2.0%, 1.7% and 1.6%, respectively. 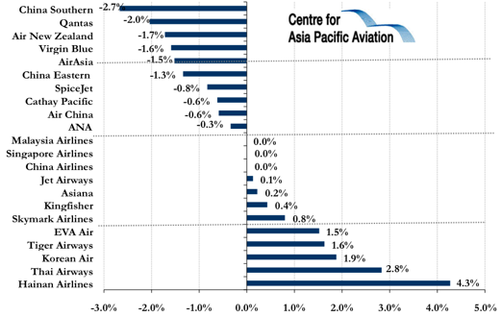