See: Continental Airlines yield contractions continue in Oct-2009, but on the improve

Republic Airways, meanwhile reported a 6.3 ppts increase in load factor for Oct-2009, to 79.3%, as the result of a 121.8% improvement in traffic and 104.4% increase in capacity. Passenger numbers also made a significant gain, up 78.1%, to 2.8 million passengers. The impressive increases follow the carrier’s completion of the company's acquisition of Frontier Airlines on 01-Oct-2009.

Pinnacle Airlines reported a 6% year-on-year improvement in net income for 3Q2009, to USD11.4 million, with fully diluted earnings per share of USD0.62. The rise came as consolidated operating income increased 13%, to USD21.1 million.

The increase in net income can be partly attributed the number of Pinnacle’s  of transactions during the quarter to increase its liquidity in preparation for 1Q2010, when holders of its remaining outstanding 3.25% senior convertible notes may require the Company to repurchase the notes. Transactions included:

ACE Aviation Holdings confirmed it is no longer the majority stakeholder in Air Canada (+7.6%), following the carrier’s issue of 160.5 million new shares. The company did not purchase any of the new shares, resulting in a decrease in its equity stake in the carrier from 75% to 27%. ACE currently holds 75 million shares in Air Canada. However, ACE stated that, in line with a credit agreement, it has received 1.3 million warrants to purchase Air Canada shares at an exercise price of CAD1.44 each, and another 1.3 million warrants at an exercise price of CAD1.51 each. 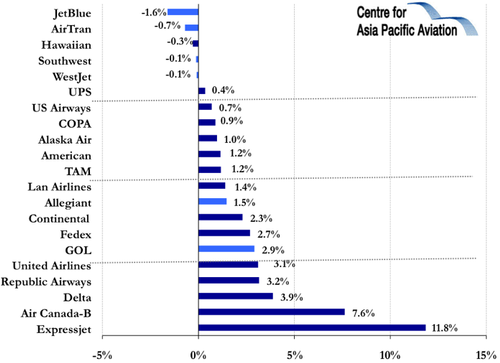