The majority of North and South American carriers’ stocks fell again on Tuesday (27-Oct-2009), with the AMEX Airline Index falling 1.1%.

The drop in prices came as oil prices rebounded (+1.1%) to USD79.55. The wider market meanwhile rose only slightly, with the Dow up 0.1% at the end of trading.

Continental Airlines (+2.7%) was one of only three carriers to see an increase in stock prices, after officially entering the Star Alliance yesterday. The move marks the first time an airline has moved directly from one alliance to another.

Continental CEO, Larry Kellner, stated the carrier’s transition to Star Alliance is one of the most important strategic moves the carrier has made during his time at Continental, with its membership in the alliance positioning the carrier “to deliver a broader network to our customers, and to achieve better business results and a stronger future for…co-workers, our customers and communities as a result of the benefits from participating in the world's largest airline alliance". The airline expects a USD100 million annual benefit from its switch from SkyTeam to Star.

Air Canada's (-9.4%) stock meanwhile plunged again after announcing during trading that it has completed the closing of its previously announced bought deal public offering pursuant to which it sold to an underwriting syndicate 160.5 million units for aggregate gross proceeds to Air Canada of CAD260 million (USD244 million).

Each unit is comprised of one Class B Voting Share or one Class A Variable Voting Share and one-half of one share purchase warrant. The net proceeds will be used for working capital and for general corporate purposes. 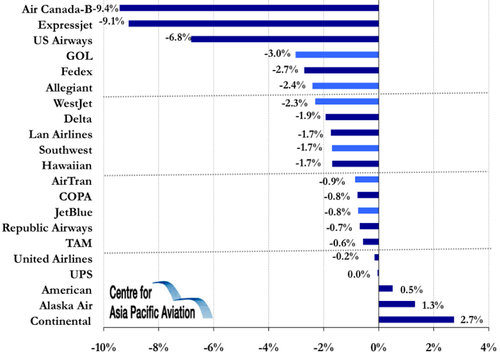