Continental Airlines' dire yield performance continued last month. The Houston-based carrier estimates that consolidated passenger revenue per available seat mile (RASM) was down by 18.5% to 19.5% year-on-year in Sep-2009 (mainline RASM down by 20.0-21.0%), for the third largest RASM contraction in the past 12 months - and eighth consecutive double-digit decline - reflecting continued discounting and ongoing weakness in premium travel demand. 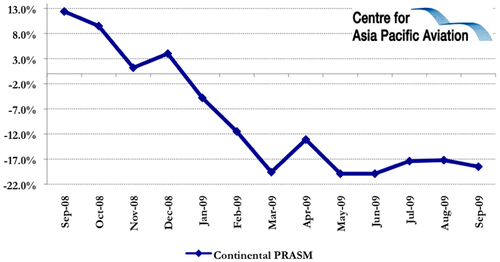 On the positive side, the Sep-2008 results included a 3 ppt increase in both consolidated and mainline RASM related to a reduction in the company's frequent flyer liability. Summing the reductions over a two-year period, Continental’s RASM reduction was 6.1% last month, an improvement from a combined two-year contraction of 11.9% in August and 12.6% in July - suggesting some improvement has occurred. 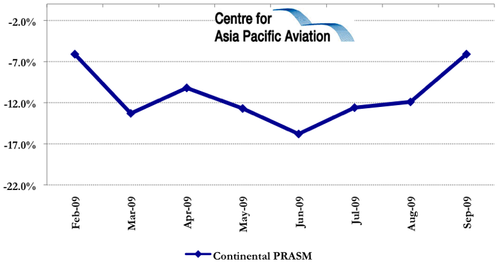 Also on the positive side, Continental Airlines reported a consolidated (mainline plus regional) load factor of 81.5% in Sep-2009, a 5.0 ppt year-on-year improvement, with a mainline load factor of 82.2% (+4.8 ppts).

Domestic load factors gained 5.5 ppts to 84.0%, with international mainline load factors up 4.1 ppts to 80.4%, meaning that all four September load factors were records for the carrier. Meanwhile, Continental's regional operations had a Sep-2009 load factor of 75.8% (+6.3 ppts), for the only segment to see a load factor below 80%.

The load factor improvement occurred as Continental increased consolidated capacity (ASMs) by 0.5% in the month, while traffic (RPMs) was down by 7.0% (mainline capacity was up 0.5% with traffic up by 6.7%).

Looking forward, Continental expects 2009 load factors to average 81% (82% for mainline operations), on a 5.2% capacity (ASM) reduction. While no RASM figures were disclosed, contractions are expected to continue, as the US enters the weak Winter season and price discounting continues.