Continental reported another encouraging set of traffic results for February, with its first month of positive yield growth since Dec-2008 and continued record load factors.

However, the carrier has estimated that the suspension of several services at its New York hub on 10-Feb-2010 and 26-Feb-2010, due to severe Winter weather in the New York area reduced its consolidated passenger revenue for the month by approximately USD25 million.

The carrier also explained that the combination of capacity (ASMs) reductions caused by the two February snowstorms and the company's re-accommodation of passengers impacted by flight cancellations resulted in a year-on-year RASM benefit of approximately 1 ppts compared to normal levels. The Feb-2010 RASM growth also comes off a negative base in Feb-2009 (-11.5%). 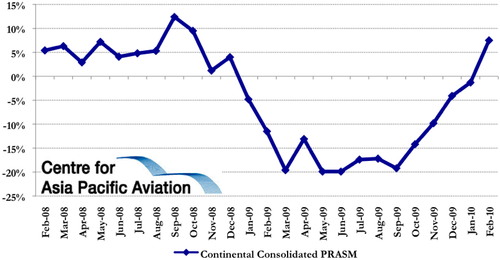 Also in Feb-2010, the airline reported a 0.3% reduction in consolidated passenger numbers, to 4.3 million, with Mainline passengers slipping 1.4% to 3.1 million, and regional passengers up 2.8% to 1.2 million.

The load factor improvements occurred as Continental decreased consolidated capacity (ASMs) by 3.8% in the month, while traffic (RPMs) was up by 3.3% (mainline capacity was down 3.7% with traffic up by 3.2%).

Looking forward, Continental has stated it expects consolidated capacity in 2010 to increase by 1-2%, with mainline capacity up in the 1.5% to 2.5% range, mainline domestic capacity “about flat” year-on-year and mainline international capacity up 4-5% year-over-year. The carrier has confirmed it is scheduled to take delivery of 12 B737 aircraft and two B777 aircraft in 2010. Chairman, President and CEO, Jeff Smisek added that there is “no question that the 787 delays have hurt Continental", but the airline still expects to receive its first B787 in 3Q2011.

Continental's overall goal for 2010 is to "start making money and keep making", although Mr Smisek noted that better year-on-year improvements must be "kept in perspective", due to unusually weak results in 2009. However, the CEO is hopeful that "2010 will be a far better year than 2009".