Continental reported an encouraging set of traffic results for January, with the smallest yield contraction in over 12 months, record load factors and improved traffic results. 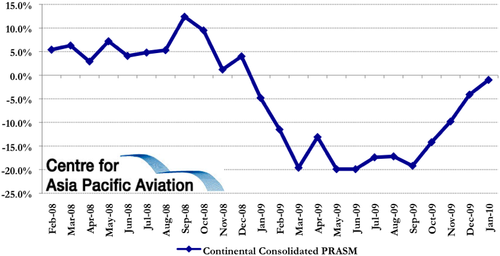 Looking at a two-year range, there is a positive RASM trend.

The load factor improvements occurred despite Continental increasing consolidated capacity (ASMs) by 2.8% in the month, while traffic (RPMs) was up by 8.5% (mainline capacity was up 3.1% with traffic up by 8.6%).

Looking forward, Continental expects consolidated capacity in 2010 to increase by 1-2%, with mainline capacity up in the 1.5% to 2.5% range, with mainline domestic capacity “about flat” year-on-year and mainline international capacity up 4% to 5% year-over-year.