The fall in airline stocks was despite another drop in oil prices (-1.2%), to USD78.70, and news international passenger demand (RPKs) to/from North America rose 2.1% year-on-year in Jan-2010, according to IATA. Latin American carriers meanwhile saw demand increase by 11% in January on the back of a strong regional economy. See related article: Two paced aviation recovery: Emerging markets streaking ahead

Meanwhile, the Dow was flat, despite news of mergers and acquisitions in some sectors and the possibility of improved earnings for banks.

Continental Airlines (-3.3%) declined on news of its USD25 million loss in revenue from constant snowstorms across the winter period, which forced it to close its hub at Newark Liberty Airport on 10-Feb-2010 and 26-Feb-2010. See related article: USD150 million impact on US airlines from winter storms

In more positive news for the carrier, it reported its first month of positive yield growth since Dec-2008 the day prior. For Feb-2010, consolidated passenger revenue per available seat mile (RASM) is estimated to have increased between 7.5-8.5% year-on-year, while mainline RASM is estimated to have increased between 5.5-6.5%. Standard & Poor's Equity Research upgraded the carrier’s rating from ‘Buy’ to ‘Strong Buy’, due to the improved revenue trends.

LAN's (-0.5%) stock decline was smaller on Tuesday, after falling 1.8% the day prior following the Chilean earthquake on Saturday. LAN resumed approximately 15% of operations to Santiago Airport yesterday and hopes to resume normal operations by Friday (05-Mar-2010). 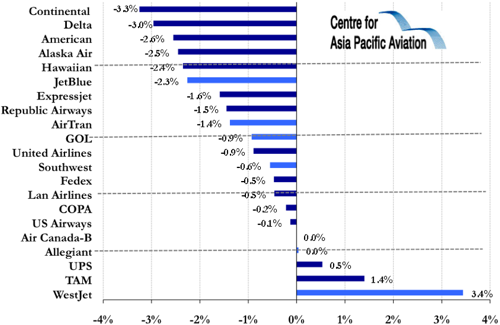