Continental Airlines gains on analyst upgrade; GOL and TAM down with Bovespa

The market was up on anticipation of the start of the reporting season and news of funding support for Greece. Airline stocks were also boosted by an analyst upgrade for Continental. The AMEX Airline Index finished trading up 2.4% as a result.

Continental Airlines (+7.0%) shares soared after Stifel Nicolaus & Co upgraded the carrier’s shares from ‘Hold’ to ‘Buy’. According to analyst, Hunter Keay, Continental could make a bid on United Airlines (+4.7%), which is reportedly currently in merger negotiations with US Airways (+4.1%). Mr Keay stated Continental has wanted to merge with United for quite some time, but has “felt no sense of urgency to do so”. Reports of a potential United and US Airways merger may force Continental to act quickly.

The carrier may also make the bid to protect its immunised JV, according to Mr Keay. He added he believes a merger between United and US Airways would be the least desirable option for United. GimmieCredit bond analyst, Vicki Bryan, agreed Continental would be a better option for United. Continental and United were previously in merger negotiations in 2008.

Brazilian carriers down with Bovespa 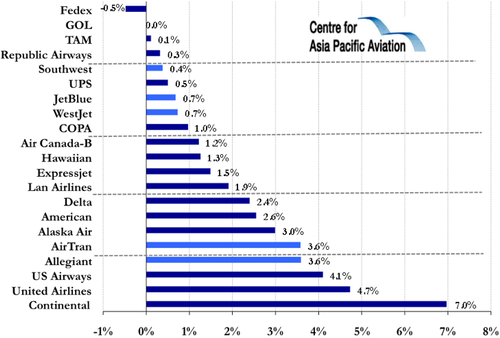